Since living in Hawai’i, Nature has become more alive to me – more intelligent – than I previously acknowledged. Everything seems to dance in Hawai’i, from the soft, flower-scented air that greets us as soon as we get off the plane, to the various winds and breezes that convey different moods and carry their own names in Hawaiian. As I become more attuned to the life of this place, I now wonder about all the communication I’ve been missing out on. 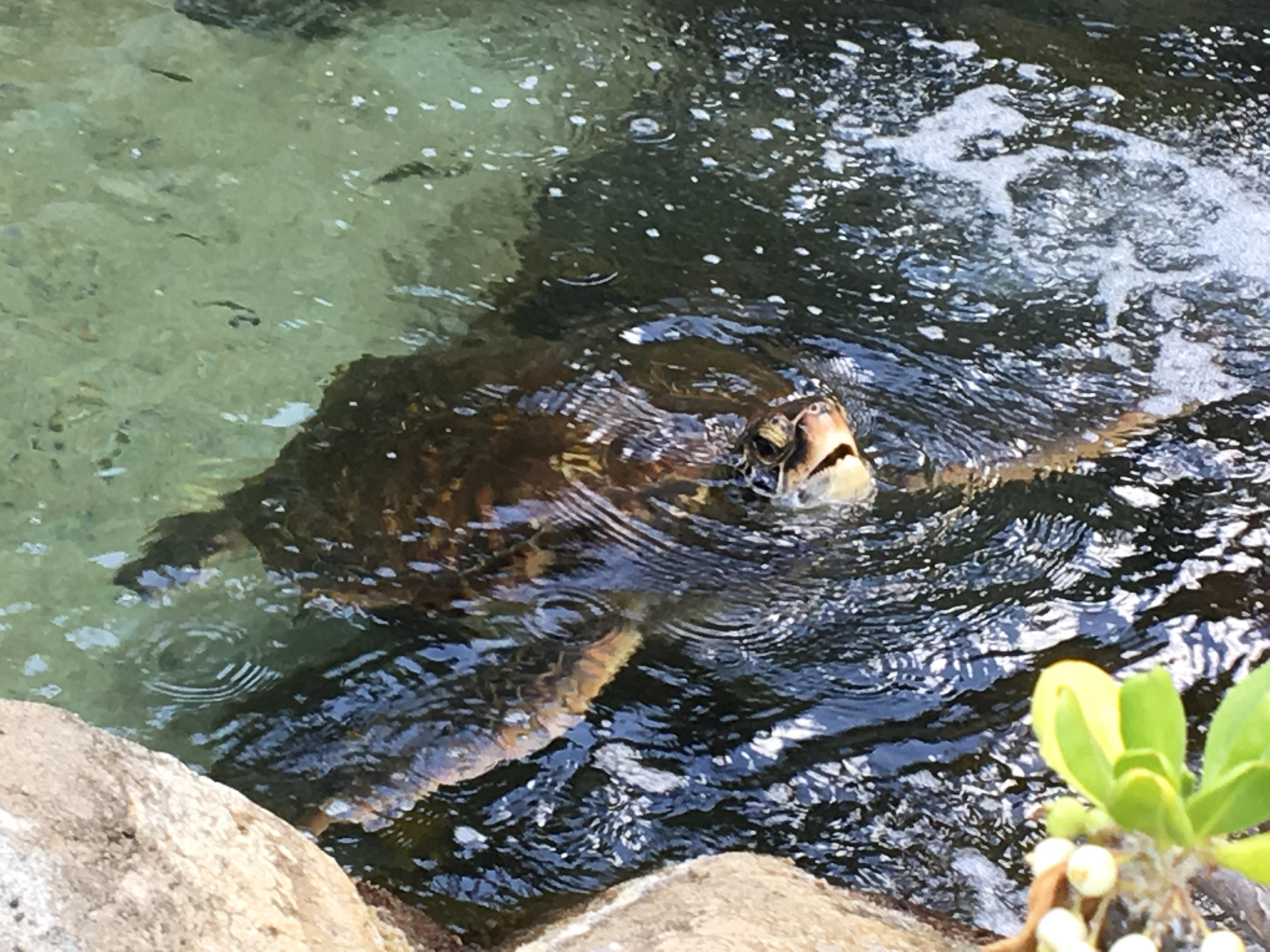 From the very beginning – when I unexpectedly ended up living on an island thousands of miles away from a dear home where I had expected to live the rest of my life – I found myself irresistibly drawn to the honu (sea turtles). I would stop my car to swim with them whenever I came upon a likely spot. Somehow, just spending time with those ancient, silent creatures contentedly gliding through the water began to convey a message to me. The honu taught me in my loneliness that I, too, could carry my home with me wherever I go, just as they do in their shells. Mahalo, honu!

Attending our first Hawaiian blessing ceremony at one of our construction sites really shook me at a soul level. What? These people – including state and county officials – gather to bless the land before they work on it? How amazing is that! And they talk to the land? 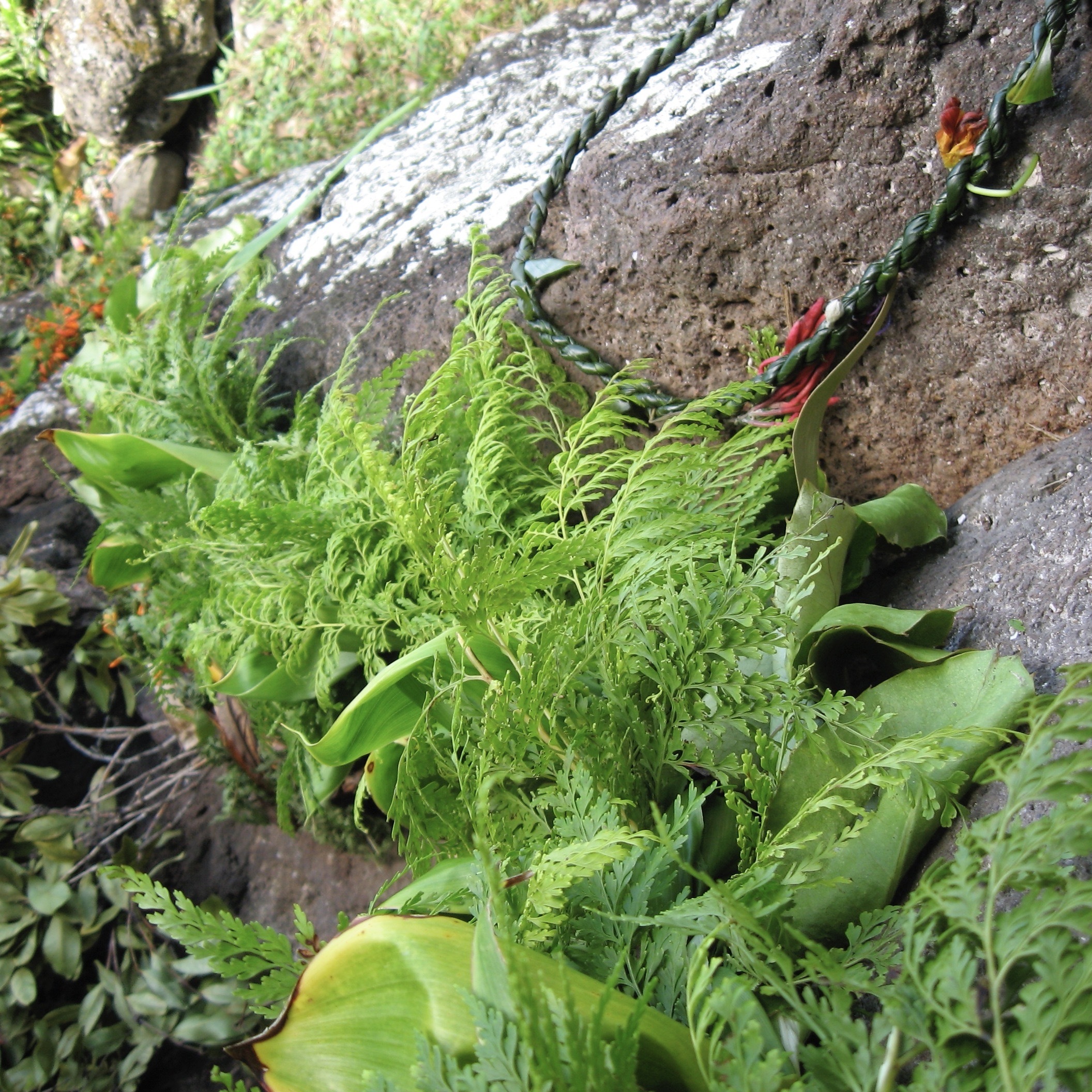 A couple of jobs later I noted the Hawaiian kahu [priest] discreetly resting his hand on a large boulder to read its energetic history before doing his blessing ceremony. Only then did the kahu allow our construction company to break the rock into smaller chunks, instructing us to bury the pieces right there on the slope in a puka [hole], rather than removing them from their place of origin. He hadn’t just talked to the boulder with a blessing, he had first taken counsel from it.

I began noticing how keenly Hawaiians study and cherish the natural kingdom. I heard stories of Hawaiians finding sand in their shoes when they flew to the mainland, and pouring the sand into an envelope to mail back to the islands, rather than callously throwing it out onto foreign soil. 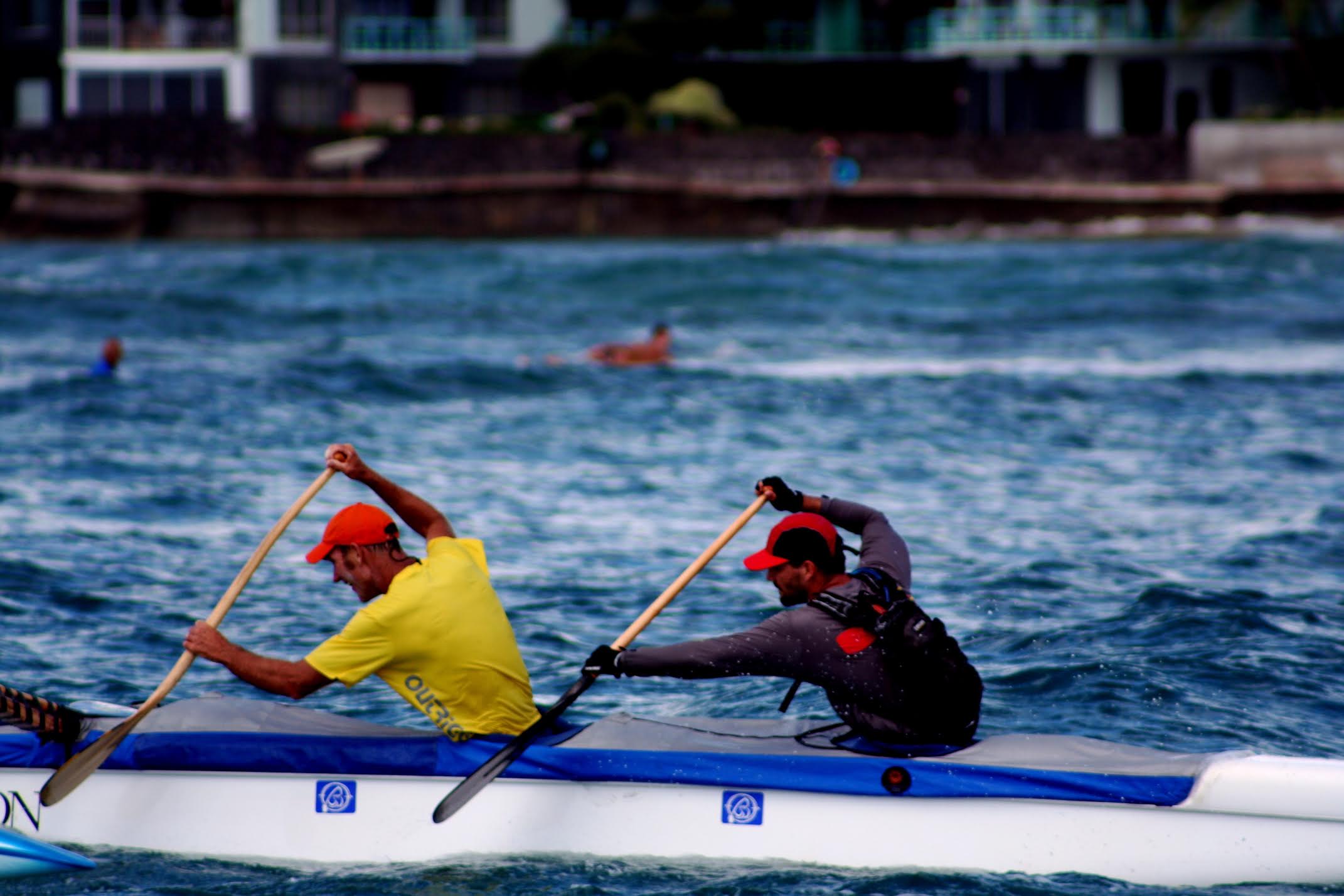 Cliff’s outrigger canoe coach is able to “read” the sea from his keen observations, such as the feel of the water through the blade of his paddle; he knows before seeing them whether whales, honu, or land are nearby. My local friend Mihana Souza told me how she watched a Hawaiian auntie stand on a cliff chanting an oli and then saw the bay below her fill with sharks. 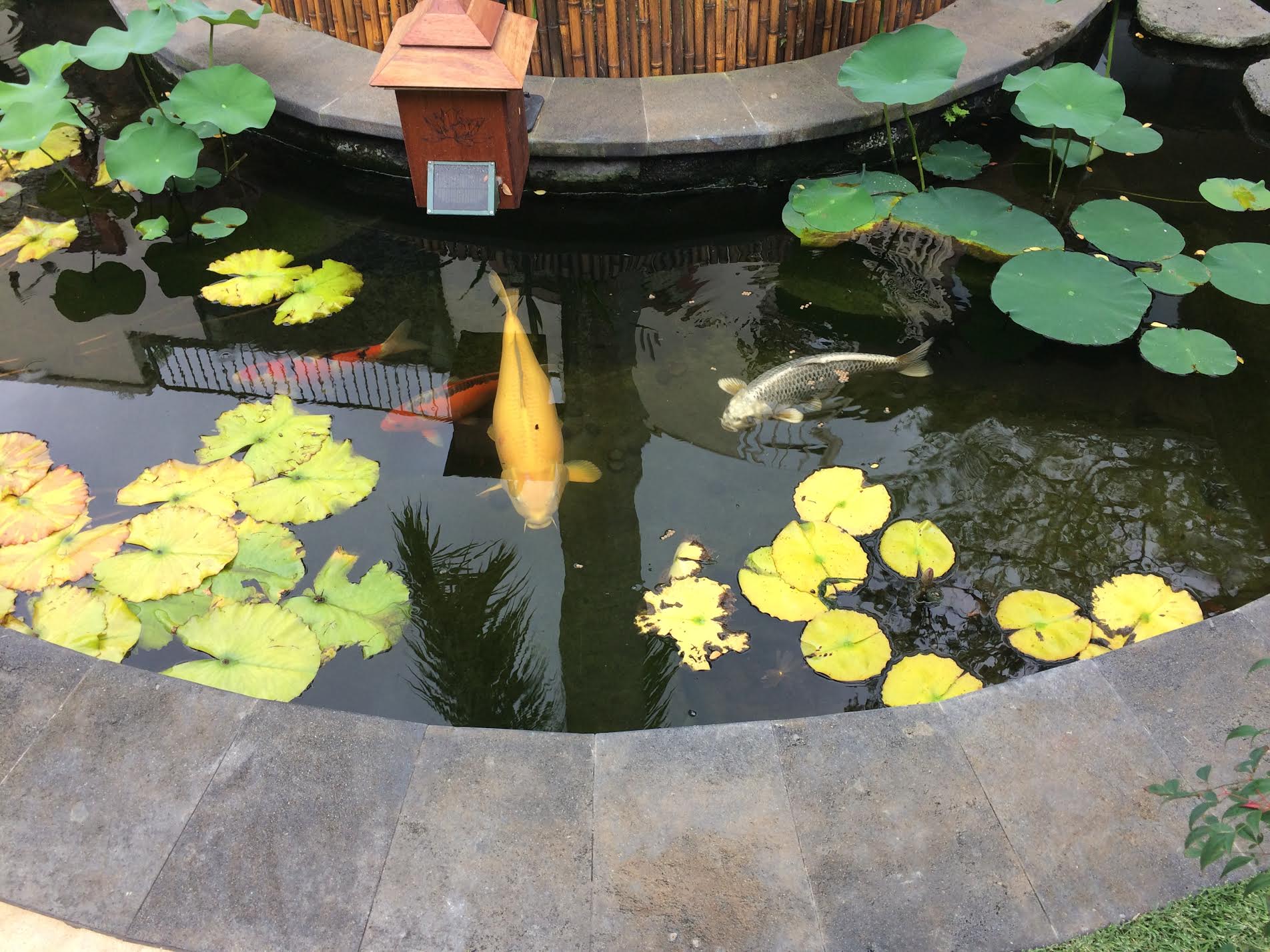 And as I wrote to you several years ago, our beautiful koi fish named Kwan Yin sacrificed her life, as it seems to Cliff and me, in protection of the other fish in our pond, but didn’t die until she gifted me with a moving life lesson.

Folks here on the islands welcome the geckos as friendly,

protective presences skittering and chirping through their homes. This was a relatively easy lesson for me. Geckos are cute! And they actually diminish the roach population, thank you very much. But those ginormous cockroaches that come out of hiding every night absolutely grossed me out. They brought out my inner samurai. Eventually, though, something changed in my relationship with the roaches. For sanitary reasons I’ll always remove them, but they have nevertheless instilled in me – through their absolutely tenacious fight to stay alive – a respect for the life force surging within them. It feels really different to go from revulsion to a begrudging admiration for this creature.

I also became cognizant of the acute awareness embodied in our little pet box turtle,

Gregarious Greg. This 6’ long reptile comes when you call him and follows your feet as long as you have the patience to let him walk behind you. I watched him spend more than a fortnight in grief when his partner Georgiana died, and he wouldn’t eat or come out of his shell. I never suspected that a reptile could have so much feeling. Another teacher in my life.

Our kumu hula [hula teacher] Mālia exemplifies attunement to Nature. She spent years with her family tending an ancient heiau [sacred site], working on its lo’i [taro patches] in Kailua every Saturday, always chanting an oli to announce their presence and to make a request to the land to be there. In fact, every time I’ve traveled to a place in nature with Mālia, she’s always chants an oli. What a unique experience it was for a ha’ole mainlander like me to go

with Mālia to a forest on the island of Hawai’i to gather ferns. First, she asked us to noticie whether it seemed to be anyone else’s regular gathering spot, and then to ask permission from the place itself to judiciously gather ferns – no more than we needed. Then we had to feel/listen for that permission to be granted. We might perceive as subtle an answer as a leaf falling at our feet. I’m still developing that sensitivity.

Each solstice and equinox Mālia invites all of us in her hula halau [school] to join her at Kalama Beach to greet the rising sun, and to notice all of the nuances of the clouds, the birds, the ocean, and especially the first beam of light shining towards us acr 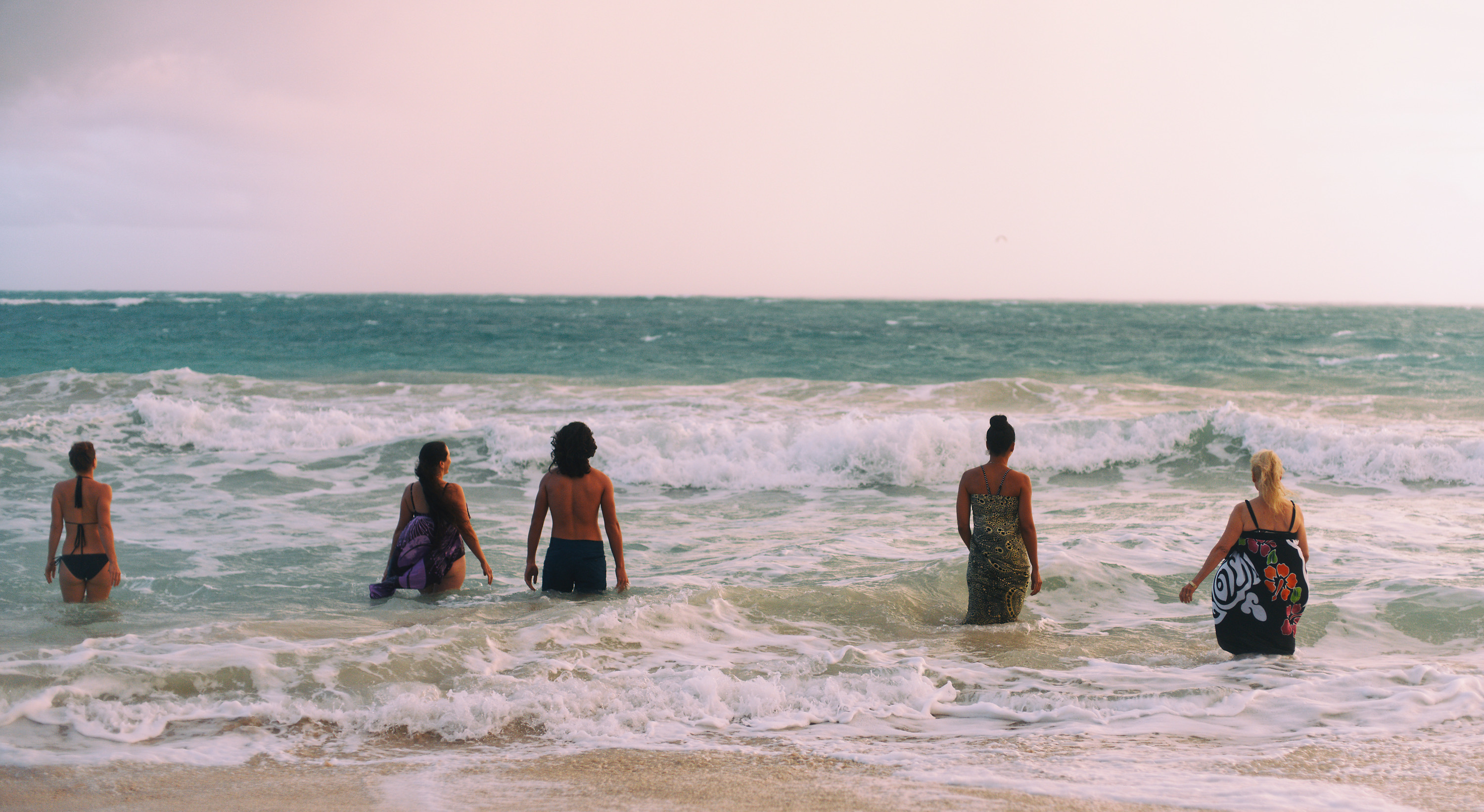 oss the water. All of these are sacred and speak to us, if we only learn how to listen.

The Pacific islanders are famous for their charming custom of wearing flowers and giving flower lei. Flowers thus become a vehicle of communication and shared feeling with one another. Our hula halau is currently dancing a hula called “Uluhaimalama”. Kumu Mālia composed the chant and the hula in honor of a beautiful garden started in 1891 by Queen Liliu’okalani so that her people would have an 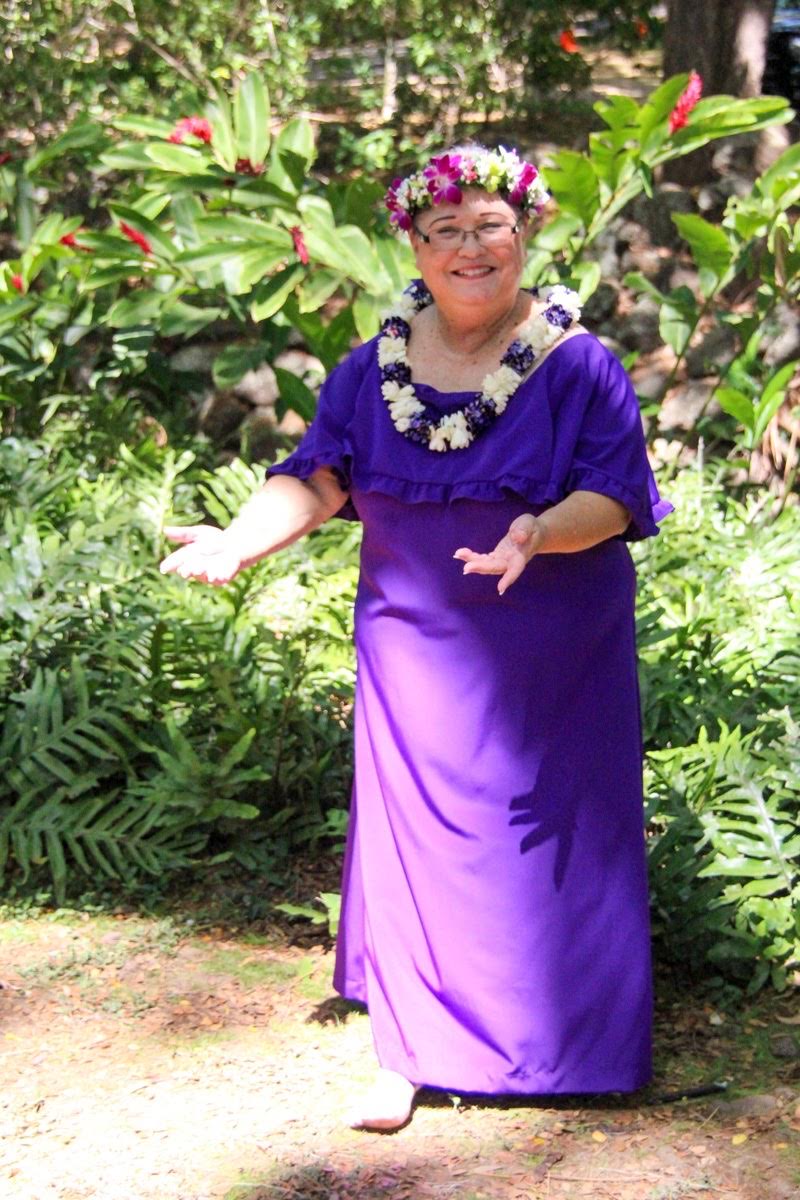 abundance of flowers available for ceremonial occasions at which they are absolutely indispensable. Shortly after Liliu’okalani dedicated land for the garden, her kingdom was usurped by a small band of renegade US Army generals (never again to be returned to Hawaiian sovereignty, alas) and Hawaiians were outlawed from assembling together. So the Queen had to plant the first shrubs at Uluhaimalama under the cover of nightfall before its official opening day.

By the next year, the Queen had been placed under house arrest in I’olani Palace. Her loyal subjects continued to renew themselves with bright energy by keeping up the Queen’s 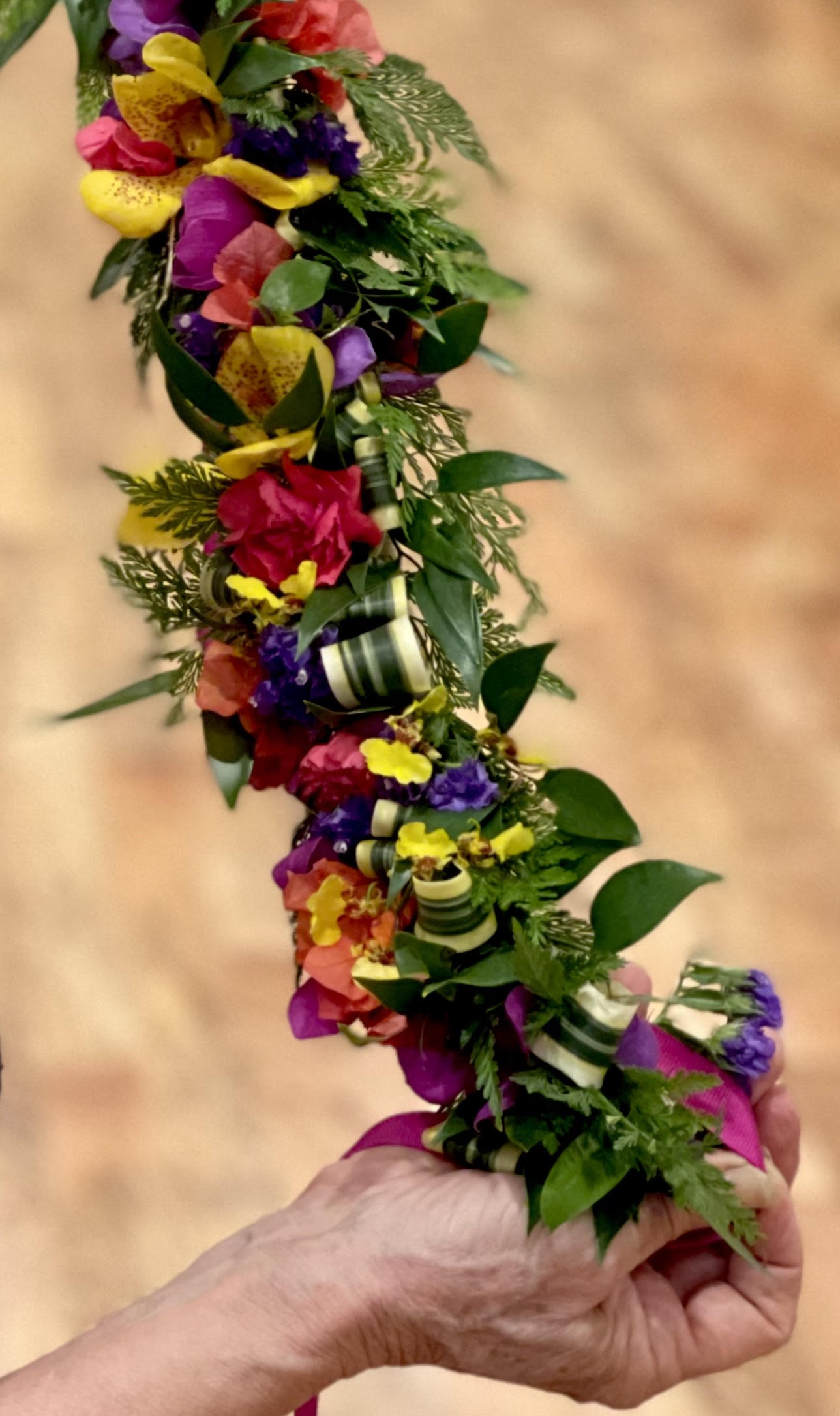 garden at Uluhaimalama. They would secretly provide her with forbidden newspapers lining the bottom of the baskets of flowers they regularly brought her from the garden to keep up her spirits. The tradition of giving flowers was strong enough to surpass scrutiny even during the imprisonment of the Hawaiian monarch. I love dancing the story of the Queen’s beloved flower garden, symbolic of the continuing life force of the Hawaiian people, even under oppression!

During the two decades we’ve lived here on the islands, science throughout the world has progressed with bounding, enthusiastic leaps to recognize the intelligence of the plant 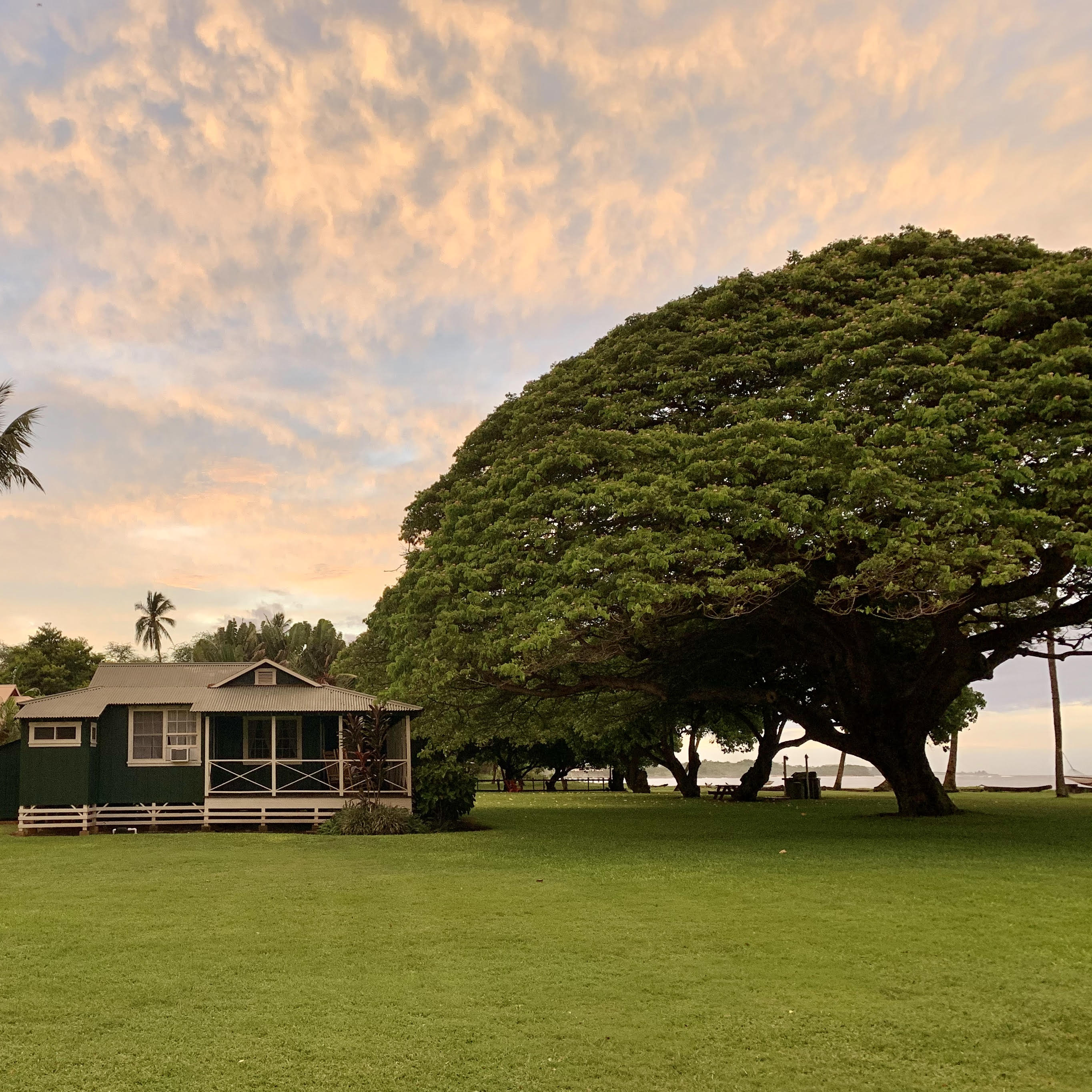 kingdom, such as the mycelium under the ground linking the trees in communication with one another. If one tree is browsed by a deer, it’s able to let the surrounding trees know to emit an odor that the deer dislike.

A wonderful author, Richard Powers from Washington state, in his startling book about trees called The Overstory, tells us that trees do more than interact with each other. He states: “Trees have long been trying to reach us. But they speak on frequencies too low for people to hear.” Imagine that: a tree attempting to communicate with us! It makes me wonder whether that grand, very sentient “Tree of Souls” in the film Avatar is really so far-fetched. Native peoples throughout the world for all time seem to have possessed an intimate, knowing, and communicative relationship with Nature, and the modern world is trying to catch up.

awai’i, therefore, is not alone in recognizing and celebrating the sentience of the life forces around us. I’m nevertheless extremely grateful to this land and its people for helping me to reawaken to the living presence of the natural world around me… even as I sit here at my tea table writing to you, listening to the birds warming up for their evening choral symphony, and wondering WHEN I will ever understand their lyrics!