by Neelanthi Vadivel | Apr 6, 2017 | Letter from the director, Life At The Center

When our driver Suresh told us his wife’s family lived in Chidambaram, I had no idea of the significance of his understated comment. I did not guess that Cliff and I were about to be delightfully ushered through a portal into the heart of India.

At the time, I did not know that some temples we visited later would exclude us with spirit-crushing signs: “Non-Hindus not allowed past this point.” No doubt they’ve been plagued by disrespectful Western tourists trampling through with no sense of the sacred. Unfortunate. 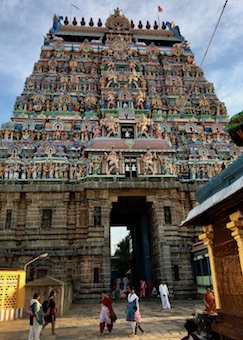 So here we are, two Americans newly arrived in India, on a private pilgrimage to Chidambaram. We know that it’s Mahashivaratri, the holiest of holy days devoted to Shiva. The famous temple at Chidambaram is dedicated to Shiva Nataraj: Lord of the Universal Dance. I am excited to watch classical Indian dancing here, and don’t really know what else to expect.

Arriving at the temple grounds, Suresh leads us to the small stand where we deposit our sandals for a small fee – I reluctantly relinquish them to go barefoot in an unknown place. 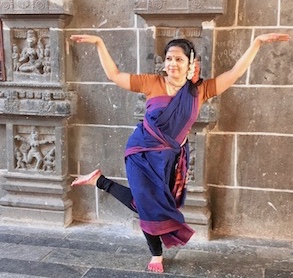 As we approach the temple itself, I forget my feet, entranced by the ancient carvings of Shiva in hundreds of dance positions, covering the stone walls. So realistic and classical are these images, we see professional dancers in front of a wall, sculpting themselves into the graceful lines of Shiva’s poses. 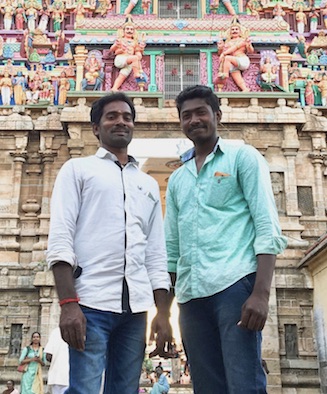 Soon another young man bounds up, throws his arm over Suresh’s shoulder, and beaming an irresistible smile from his dark, handsome face, greets us warmly. This is a brother of Suresh’s wife, but the affection between the two of men is so evident and deep, Shiva Ram seems to be Suresh’s own brother. Soon we happily meet Shiva Ram’s father, a middle-aged man with deeply kind eyes and a large crooked smile. Even without a shared language, we feel a kinship with him.

Suresh now brings us into the temple itself, with its long rows of ancient stone columns. Every few paces we encounter a shrine to another aspect of the divine. In Hinduism, deity is one whole with myriad aspects. And each of the Hindu gods – all facets of one shining Divine – have their own names, faces, attributes and stories. I study 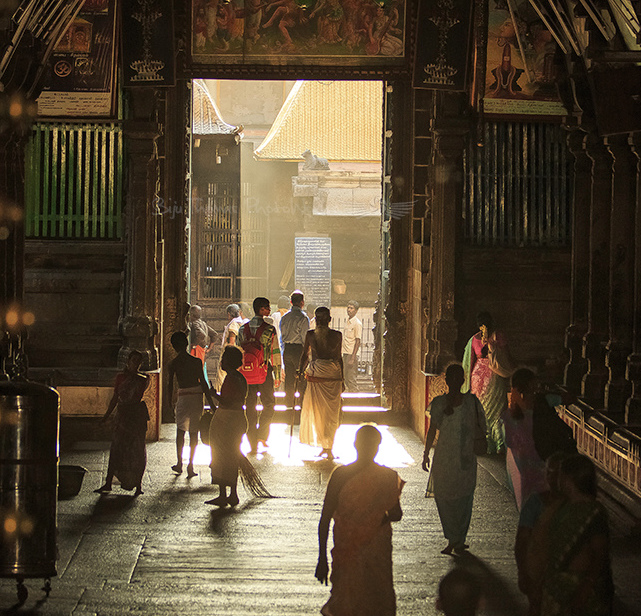 each stone and metal image intently, always recognizing Shiva’s son, the elephant-headed god, Ganesh. I often correctly decipher which of the other deities I’m looking at. Suresh nods approvingly.

As evening advances on this Vigil Night of Shiva, so do the devotees. The temple fills with women of all ages draped in their beautiful saris, and men more drably attired, most in traditional wrap-around lungi’s for this sacred occasion. Children dazzle in bright finery and even brighter eyes.

The shrines become a bit difficult of approach through the throngs of devotees, each with their own manner of worshipping their favorite deities. Incense is burning, priests are chanting and occasionally offering sacred ash and bright red and orange paste for our foreheads. We are surrounded by nearly wall-to-wall currents of people.

Now Suresh’s father-in-law, that dear man with the gentle eyes, reappears with a priest wearing a sacred thread across his bare chest, who manages to convey to us – above the din and language barriers – that he needs our names. We shout them to him, and Suresh lets us know that we are being invited to a special ceremony.

Braving the crisscrossing tides of humanity, we slowly make our way up the stairs to the platform of the inner temple. I marvel at myself, someone who typically hates being in crowds and loud noise – I have often compared being in crowds at a rock concert to the closest experience I’ve had to hell on earth. Yet, here I am, undaunted among thousands of human beings…all of whom are sober, all of whom are simply present to honor what is holy to them. 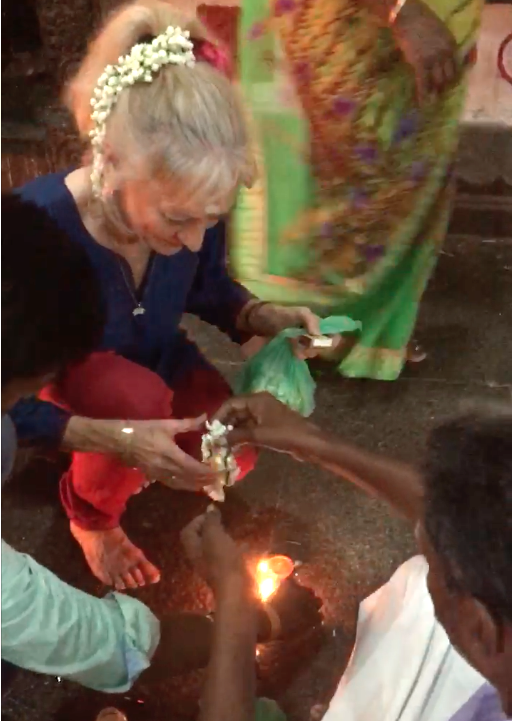 Cliff is instructed to remove his shirt to be closer to God, and we are eventually pressed through the crowds of devotees into the temple’s inner sanctum. Numerous ceremonies are happening simultaneously. Our priest chants mantras while holding a sacred fire in a metal bowl, and he invites us all to receive the smoke as a veil-like blessing over our heads. He no doubt includes our names in his prayer, but his voice is drowned by the dozen other priests who are chanting, waving flames, and pouring milk or ghee over holy statues.

We emerge from the inner temple, a bit dazed. Cliff dons his shirt again. When we thank Suresh and ask him to give our appreciation to his father-in-law, Suresh says that even he has never been in the inner temple of Chidambaram before. That’s when I realize what a generous act of inclusion this family has extended towards us. 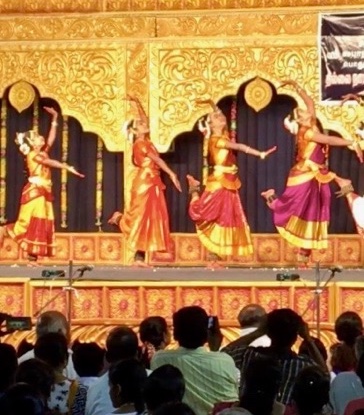 Now it’s time for dance performances in the temple courtyard. This display of Indian exuberance, with fabulously colored dance costumes, blazing footwork, dramatic eye and hand gestures….and horrible speakers at maximum volume, is truly an ear-splitting event. My poor eardrums and I jump at Suresh’s suggestion to leave the temple for a cup of tea. I actually can’t wait to get out of what I had thought would be the highlight of the evening. The dance performance simply pales in comparison to the family including us in their sacred ceremony. 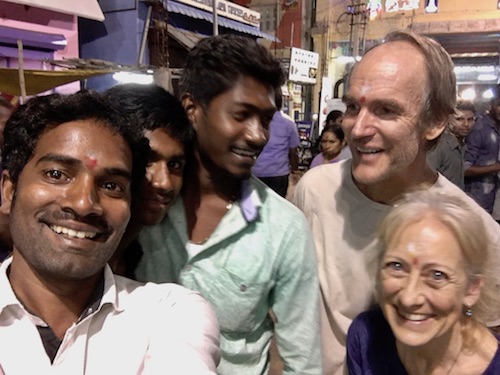 Suresh and Shiva-Ram lead us through the temple grounds, straight past the shoe stand and out into the crowded, festive street. Cliff’s jaw drops in amazement as I follow the two young men into the city in my bare feet. This is not his scaredy-cat wife who took 40 years to decide to travel to India! I’m so enchanted by the whole occasion and so embraced by these people, I feel a certain invulnerability entering further into their world. I nevertheless exercise enough caution to get my cup of hot chai in a sanitary paper cup, rather than a glass that I’m not sure has been washed! 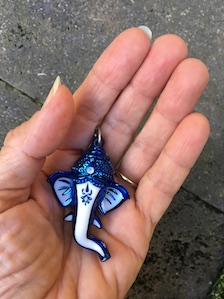 Suresh next heads for a stand selling Hindu souvenirs. As he buys his items, I try to hand him rupees, asking him to buy me one of the blue Ganesh key-chains that have caught my eye. Suresh turns to us with a shy smile and delivers his own purchases into our hands: the exact shiny blue Ganesh I had wanted, and a shiny red one for Cliff! “For you, a gift,” he says, evidently being a mind reader…but completely innocent of what a soulful gift this entire trip to Chidambaram Temple has already been for us.