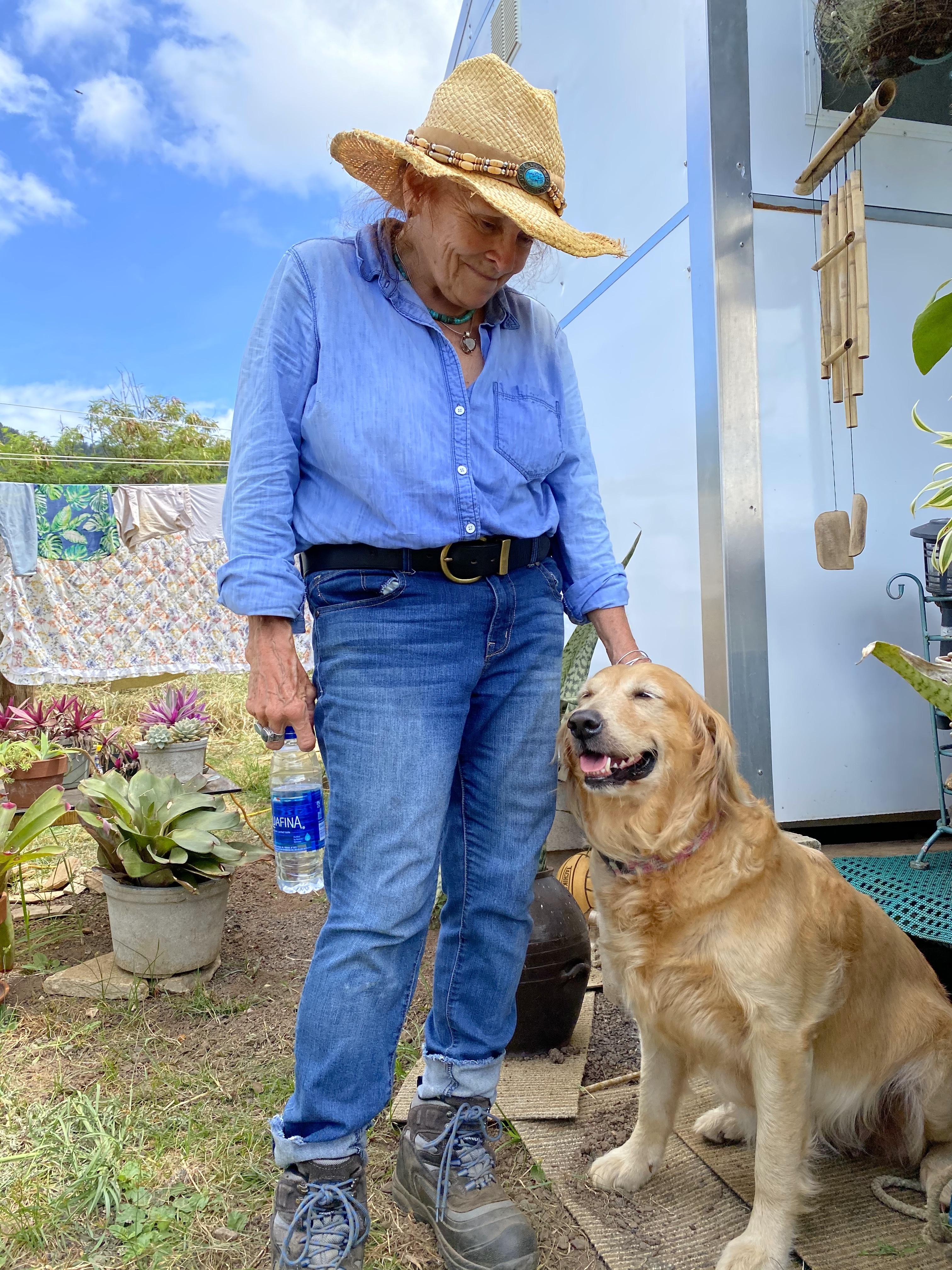 professor, with a large salary and a BMW, to living on the streets with only her faithful golden retriever for companionship. In her story I feel her power to heal not only herself and her immediate community, but also US!

Kat’s parents raised her with kindness. When she needed discipline, her parents would send her to a corner and ask her to think about how her actions or words would affect her family and would affect the world. In their gentle way, they always taught her to draw the larger circle, which she has always done. Through all the hardship she has suffered since she lost her family, then eventually her job, home, car, and even her teeth, she has shown unrelenting grit in the face of adversity and unstinting commitment to healing others.

Kat has been living at the Waimanalo tiny house village since Blanche McMillan took in most of the homeless individuals living at Waimanalo Beach Park as the Covid 19 pandemic hit us. “She saved my life,” Kat says of Blanche. “Literally, saved my life.” Kat now resides in a secure little 10’x12’ home at Hui Mahi’ai ‘Āina, the small community that the McMillan family started on a large parcel of land behind their back yard. 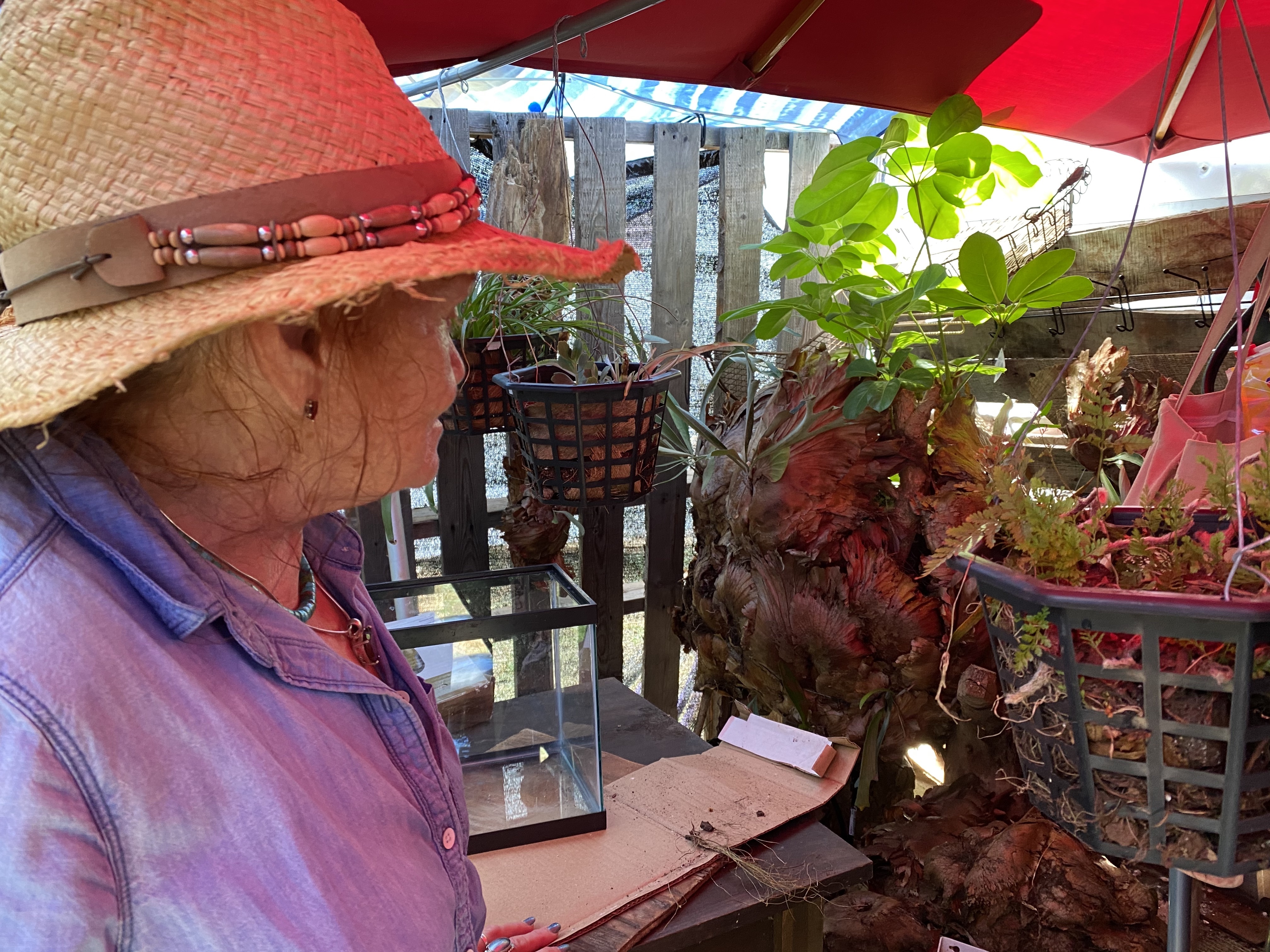 The day I met her, Kat had just finished installing a shade-cloth cover over the aquaponics garden that she cares for in the village, growing some of the community’s food. She also showed me an enormous staghorn fern “mama” and “babies” whom she had rescued from the chipping pile when someone chopped down the fern’s host tree. Her saving that magnificent plant from destruction seems curiously symbolic of her ongoing quest to rescue and heal others.

Little wonder: on her mother’s side she is a 5th generation Lakota Sioux, in a line of medicine women. Always top in her classes, Kat earned her Ph.D. in Psychology, her Master’s in Health, a degree in Jungian psychology, and certification as an RN (Resident Nurse). While working with infants in an intensive care unit, she earned the fond title of “mosquito” for her aptitude of finding a vein in the tiny babies’ heads with a needle to delicately install their IVs. She learned many caregiving tips from the traditional Portuguese healing women who worked around her in a clinic on Maui. Kat defines herself as “a chronic caregiver”.

Given her enlightened upbringing and brilliant education and career, how did Kat fall into such an abusive relationship that she had all her front teeth knocked out, with first her jaw and then her hip broken? How did she land on the street?

At age 22 Kat suffered the tragic loss of both parents, her sister, and her aunt to a car accident. From that time on, she says she became “adoptable”, always thinking there surely must be some older woman who would like a “daughter”, as she would like to have a “mother” again. Somehow that adoption never happened, until a year ago when Blanche took her in. Instead, she suffered more loss when her husband – a nice enough guy, whom she loved – had an affair with a younger woman.

Kat had been working with the mentally ill as a therapist for the State of Hawaii. After her divorce, Kat left her Maui birthplace and moved here to O’ahu, determined to let serving the community mend her broken heart. Kat started fresh as a therapist at the State Mental Hospital in Kaneohe. That was in 1995. While working there, she developed the patient rehab program.

In 1998 a patient in the mental hospital came charging down the hallway and slammed Kat’s head into the wall. She suffered a tremendous injury to her limbic brain and was unable to talk for 6 months, and then started speaking in rhyme, sounding nonsensical. Nowadays, because of the notoriety of brain injuries to football players, doctors and the public alike understand these mysterious, mostly invisible injuries much better than they did in 1998. It took a long time for anyone to even diagnose what was wrong with Kat. She lost her job, and her friends, who saw no progress for a long while, gave up on her. 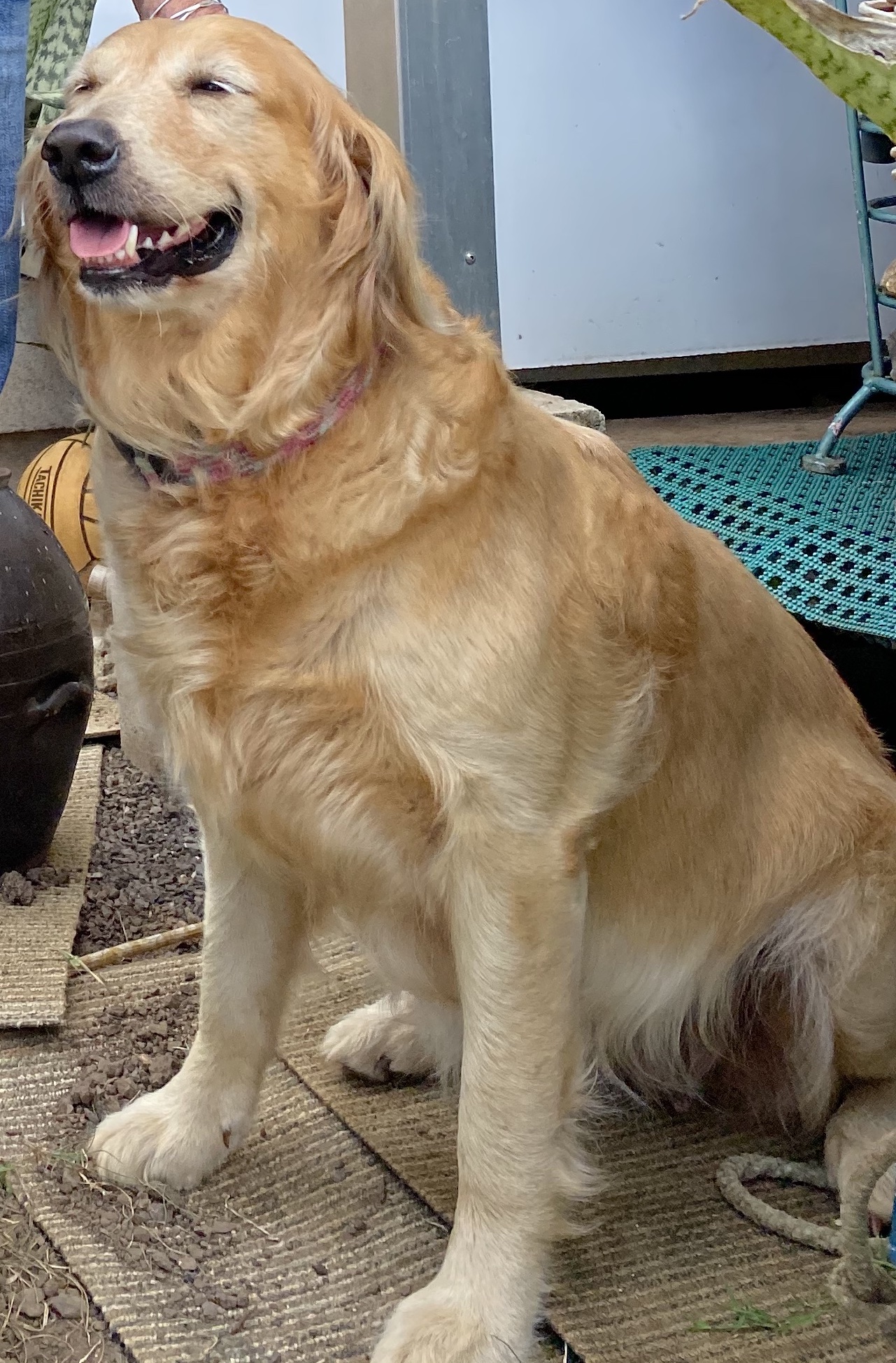 This brave lady just kept doing her best to heal other people. Serving on a rehab committee for children with autism at the Rehab Hospital of the Pacific while still in the depths of recovery herself, Kat heard mothers crying for some kind of treatment for their little girls and boys. Kat has always felt close to animals, and she had heard about treating autistic kids with fish and dogs. Kat got her own golden retriever, who indeed served to mitigate her seizures. Somehow the dog’s presence helped settle the halo system of her limbic brain. In one of these heart-rending meetings at the Rehab Hospital, Kat experienced a vision: God told her to raise golden retrievers to help children with autism.

Kat Souza moved to a farm and dedicated herself to raising golden retrievers, who helped many children with their seizures. However, because she was raising so many of these canine helpers, she was kicked off of two farms for having too many dogs and found nowhere else to house herself and her dog family.

Even though she was now homeless herself, Kat continued to serve others by buying medicine and giving shots to homeless dogs who would otherwise die from Canine parvovirus. The biggest compliment she remembers receiving came from a little boy who saw her at the store and asked his mother, “Mom, isn’t that Dr. Seuss (Dr. Souza) who saved the dogs?” The little boy recognized Kat for her virtues, not seeing her as the homeless street person that other people were now seeing her as. Only the other homeless folks – and the little boy – embraced her into their fold without judgment.  “Love is amazing,” Kat declares. “Homeless people will treat you like family.” 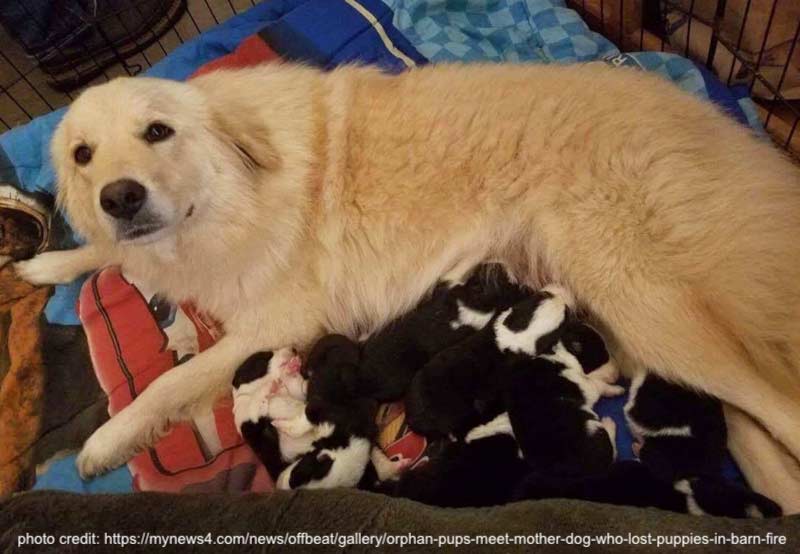 Sometimes the dogs taught her the lesson of non-discriminating compassion. One of her early golden retrievers once adopted and raised 7 newborn puppies whose pitbull mother had died in labor… Kat’s retriever even spontaneously began producing milk for her adopted litter when she was not pregnant or nursing puppies of her own! [Today, many years later, Kat is in the process of writing a book called “The Golden Rule: Spiritual Lessons from My Golden Retrievers”. She doesn’t have a computer, notebook, or typewriter, as she had when she was publishing her professional work in the past, so she’s writing her newest book on her phone.]

Even though no one would rent a place to her, Kat refused to give up the golden retriever service dogs she was raising. One day, while staying on a friend’s couch, she had a serious talk with the divine: “God, You are the one who has told me to raise all these dogs. If You really want me to keep doing this, You have to give me a clear sign.” That afternoon she hitchhiked for the first time, determined to buy food for the 6 dogs she was still caring for. Who should stop to pick Kat up on that day when she was praying for a sign? A woman whose son was a head-banging autistic boy, saw Kat on the road, stopped, and opened her car door. She looked at Kat and asked, “Aren’t you the woman who used to raise dogs to help the autistic kids? I’ve been looking and looking for you!” How clear a sign could that be?!?

Some of the people on Kat’s long path to recovery hindered rather than helped. After Kat’s brain injury, and after her “hoity-toity” friends gave up on her, Kat was struggling to get her shattered life back together when she met a man who seemed to give her very good care. In her vulnerable state, still not able to think clearly, and always being very “adoptable”, Kat could not see at first that she was dealing with a narcissistic control freak. She had never been abused before, and she missed the warning signs. Soon this man was controlling and emptying her financial resources, telling her that if she told anyone, they would not believe her, and he would hurt her. Scary kine.

At some point, this abusive man smashed her in the mouth and knocked out nearly all her teeth. Any distinction she held as a 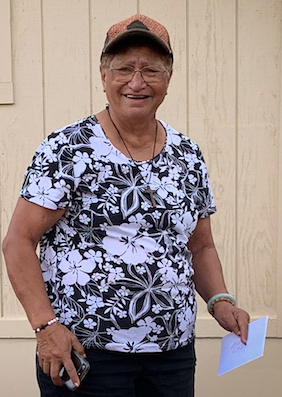 long-time “contributing member of society” seemed to fly away with her teeth. She had truly joined the ranks of the unloved of our society. No one was there to protest or to protect her when the same man broke her hip.

Kat finally realized she had to reach out for help. She got a restraining order on the man. And Aunty Blanche invited her to Hui Mahi’ai ‘Āina in 2020, where he can no longer successfully stock her, and where she says that for the first time in years, she has not had her pocketbook stolen. Here she truly learns that “you don’t have to be born in the same house to be family.” Understandably, Kat tends to trust animals more than people. Blanche, her family and the entire village are winning back her trust in the human race… and in herself. Kat’s decided to take another chance with her heart.

Kat wants to “live to see the day when victims are not victimized,” the day when we truly acknowledge, “There but for the grace of God, go I,” whenever we see our down-trodden fellows. She feels as if society has turned a corner, exhibited by the 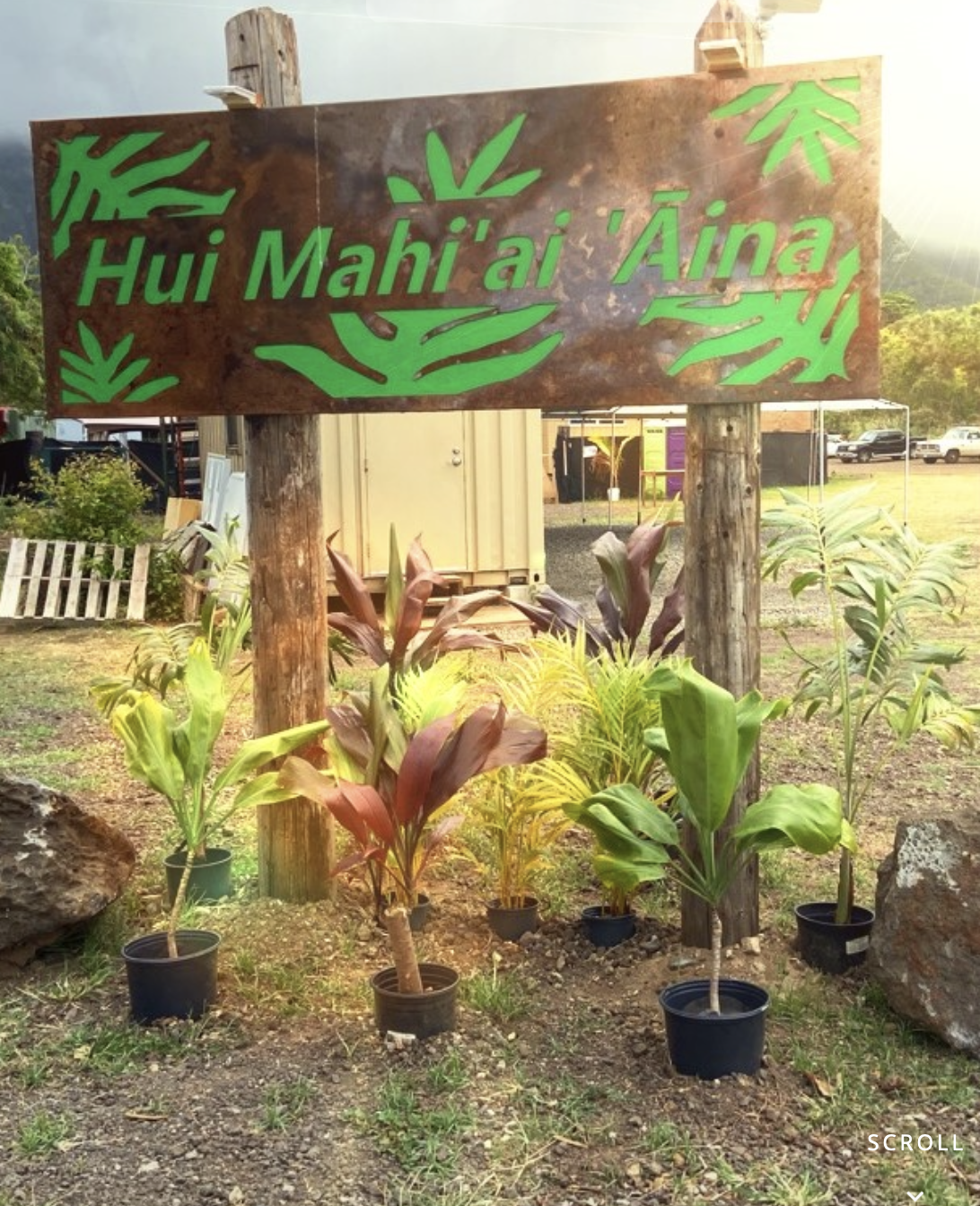 fact that for years all these people kept telling the homeless folks that they were going to do something to help, and no one ever did until the McMillan family opened their hearts and their home to the homeless in Waimanalo.

A poet herself, Kat has her own take on a poem written by Rilke to the Divine:

And break it yet again

Shall have the heart to love. 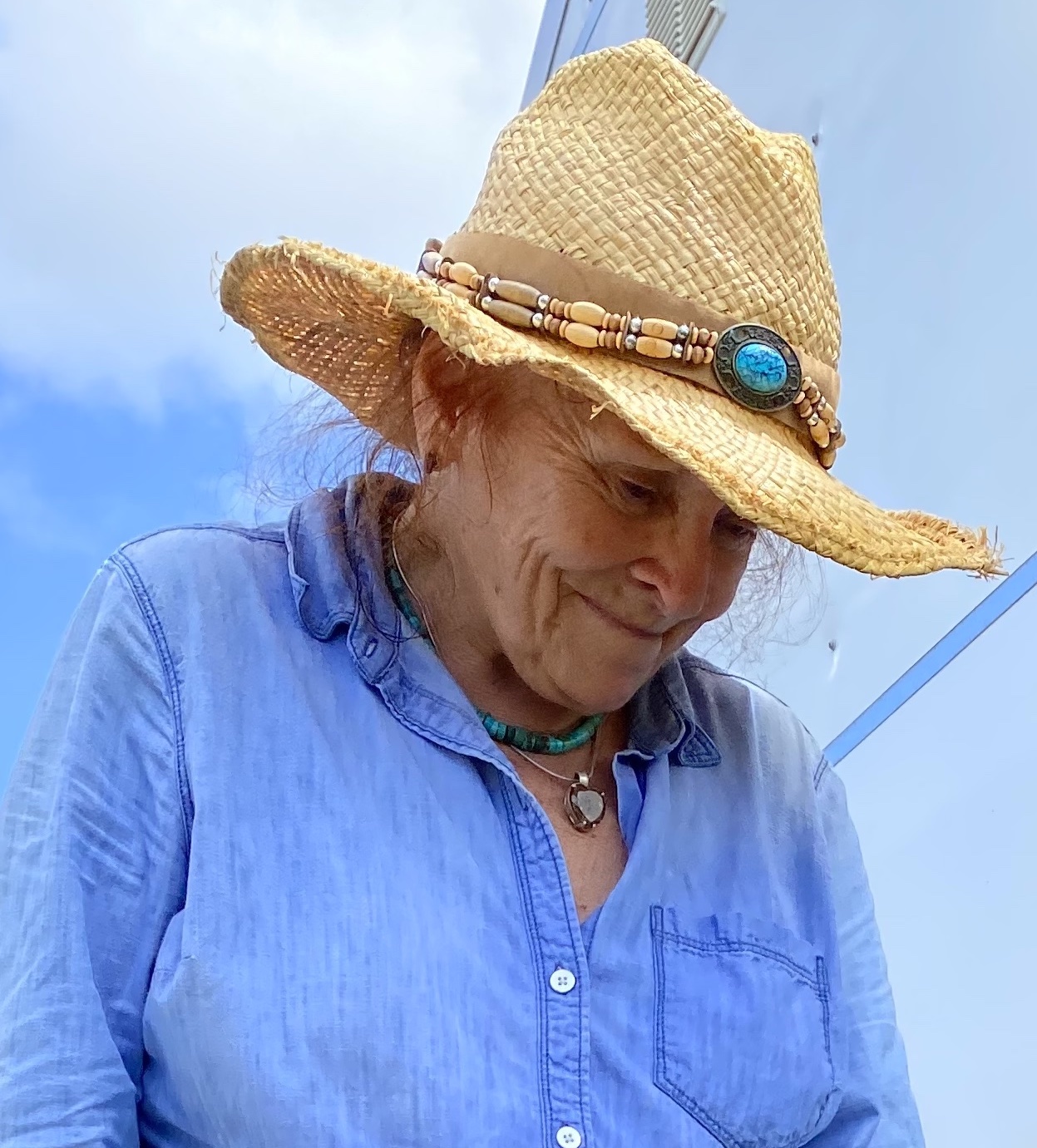 happenings. She compares each painful event to a grain of sand that lands inside an oyster as an irritant that causes the oyster to eventually create a beautiful pearl.

When I ask about her vision for her future, she replies that she’d like to have her teeth repaired and she has several books and lots of poetry to write. Ultimately, though, her life is dedicated to the service of healing, and she will do everything she can to further the work that people like Blanche have started.

My husband, Cliff, who volunteers a lot at Hui Mahi’ai ‘Āina, talks about the importance of dissolving our “us-them” mentality in relation to folks living on the streets. My first couple hours spent with Kat Souza did a lot to heal me of my own separatist mentality. I think of Kat as a remarkably resilient medicine woman, who has endured painful trials to establish herself as a radical healer of souls.

To hear a truly inspiring, eloquent speech that will go a long way toward healing your soul of any us-them feelings that may be lingering in you, please watch this video clip of Kat speaking at Hui Mahi’ai ‘Āina’s one year anniversary. You can see the founders of the tiny house village, Blanche and Willie McMillan, to the left below Kat onstage.