A sign of health is that we don’t become undone by fear and trembling,

but we take it as a message that it’s time to stop struggling and look directly at what’s threatening us.

Allow me to tell you, if I may, about how Tony Bonnici handled it, together with his wife Amber, both life coaches needing to walk their talk when it really mattered.

So many folks lose it in clutch situations. We struggle to accept what has happened. We grip with all our might onto a reality that no longer IS. We basically check out of the present moment by blaming the universe, spinning off into would have, could have, should have.

How willing and prepared to stay fully present in the moment is a person – a parent in this case? How could WE best face an overwhelming situation? What if we took a deep, huge 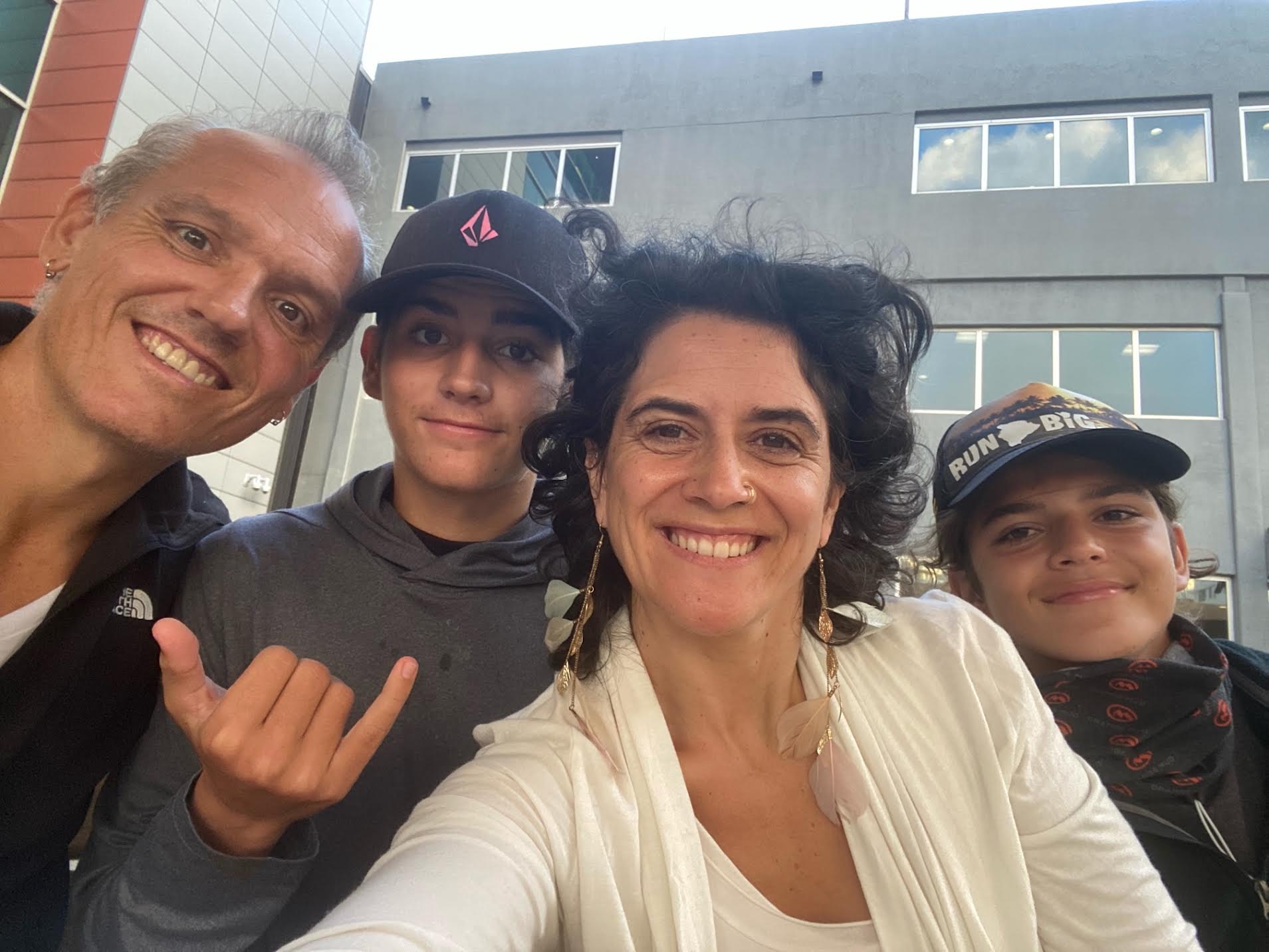 I asked Tony and Amber what techniques or principles they relied upon to get through their family’s near-brush with mortality. Here’s their story.

Their sixteen-year-old son Sage has been learning to free dive in the ocean – we’re talking depths of 100 feet with no breathing equipment. A few weekends ago he made some of those very deep dives despite some head congestion. On that Monday he was unable to “clear” his ears, so he resurfaced after diving only 45 feet. On Tuesday morning he awoke with a significant earache. By Wednesday, he had a fever brewing and something dripping out of his ears, so Amber made a doctor’s appointment.

On Thursday morning Sage went into body shakes. Amber loaded him into the car and headed straight for the closest hospital, in Kona. On their way, Sage went into a seizure for the first time in his life – eyes rolled back in his head, motionless and completely non-responsive. Can you imagine having to keep driving to reach the hospital while your kid is in seizure?!? Amber called upon Jesus, ancestors and angels to help her through it.

She kept the presence of mind to call 911 while driving, which directed her to a nearby fire station, where Sage was stabilized and taken to the hospital by ambulance. 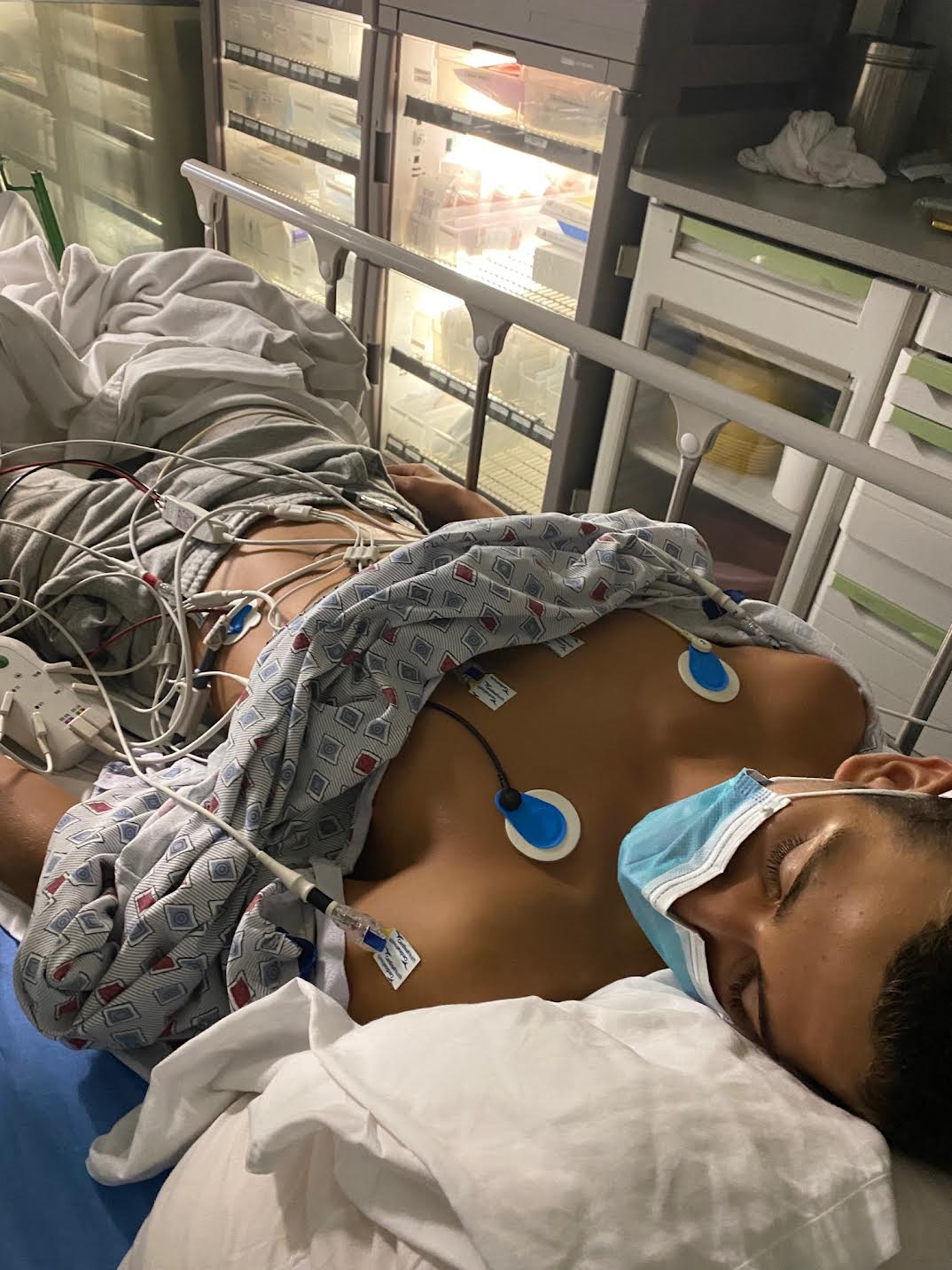 their younger son Bodhi. After Amber left, Sage suddenly made a huge turn for the worse. His temperature soared and within a matter of minutes he again went into a full seizure.

As Tony describes that event in the Kona hospital, it took all his life’s training and practice to watch his son writhing on the hospital bed as the room filled with more and more medical personnel. To stay grounded, Tony took in every detail, counting the number of doctors and nurses, noting the job that each of them was doing to keep Sage alive, as his vital signs dropped.

Tony tells me about the practice he learned from his dad, a Zen roshi, of consciously allowing his emotions and feelings to well up, the sensation filling him to just the chin level – very like a person managing to keep their chin above water so that they don’t sink and drown. As he surveyed the hospital room, Tony quivered with the felt sense of the moment’s magnitude.

Then Tony saw a staff member come into the room with the “paddles” used to shock a patient’s heart back into activity after a cardiac arrest. He realized for the first time how close they were to losing his son.

At that point, Tony recalls using a different technique to stay present. Instead of feeling all the emotions with which his body was reacting to the situation, he threw up a wall, a shield. Tony had learned this method for deflecting energy – in this case, the energy of emotion – from his decades of judo training. There was no spare consciousness available for his feelings. He now needed to give full attention to willing Sage into life, willing him to hold on, to stay with them.

Sage regained consciousness, and they did not use the “paddles” on him, yet one of the doctors told Tony to call Amber and have her come to the hospital immediately. I can just imagine how terrifying that directive must have been – to call his wife in to possibly say goodbye to their first child. I get shaky just thinking/feeling about it. But the two of them held it 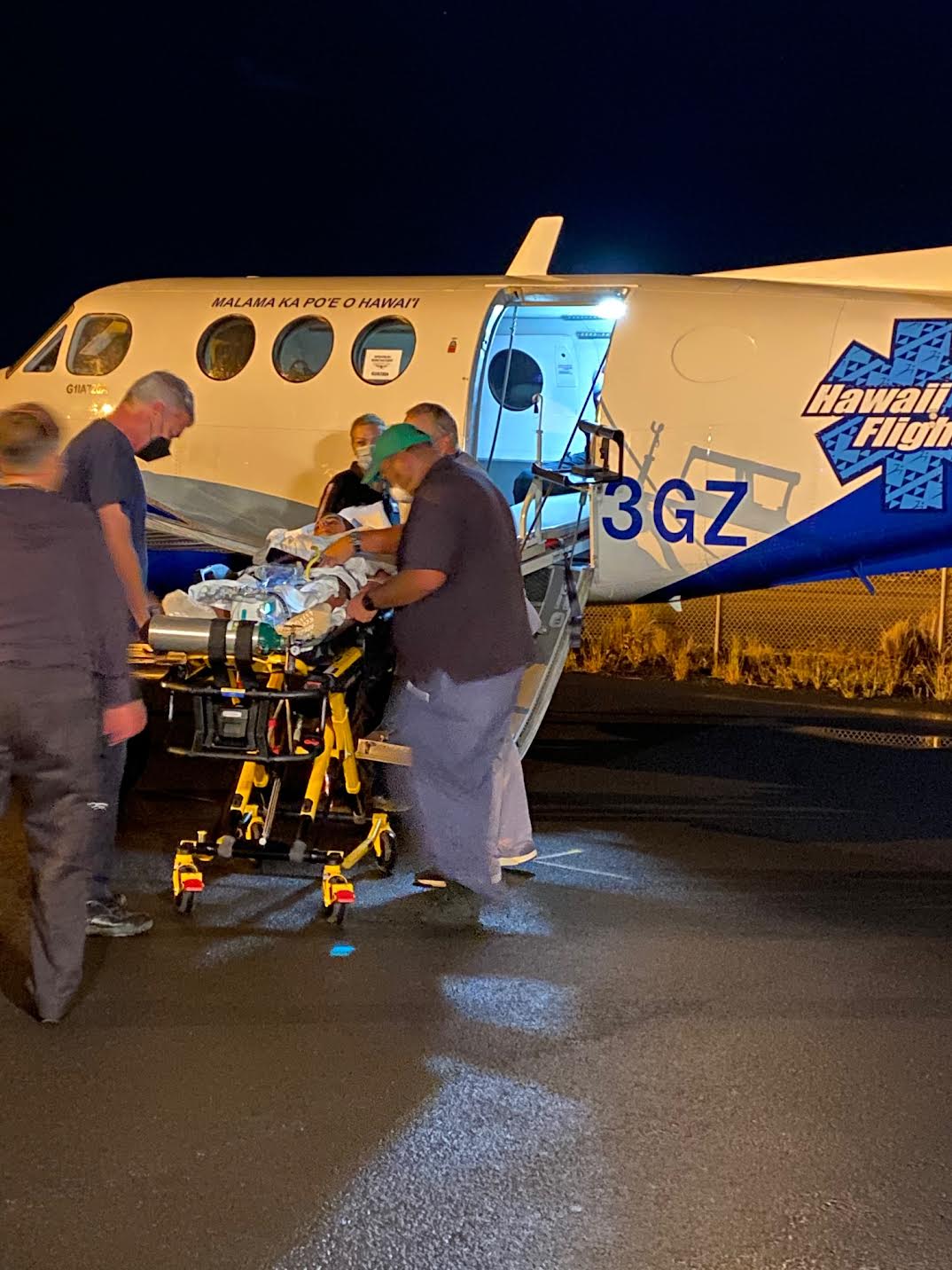 together, Amber quickly dropping their younger son off with a willing neighbor.

The medical team did a spinal tap on Sage, looking for bacteria in the spinal fluid, then Amber got into the plane that medevacked Sage from the island of Hawaii to the Kapiolani Medical Center for Women and Children on our island of O’ahu. Sage needed more specialized care than Kona could provide.

Amber went into Mother Bear modality, caring for and protecting her cub. This is a form of the warrior mode that Amber teaches in her Women Unleashed retreats. For seven nights and days, Amber barely left Sage’s bedside. She “slept” on a tiny flat cot beside him, awaking at least every two hours when the nurses came in or when Sage came down with ferocious headaches. His ears were still dripping a substance out of them, and he was on double antibiotics, intravenously, for three hours at a stretch, three times a day, with pain meds every 3 hours for his head.

Tony had immediately followed his son and wife to O’ahu and was staying at our house. He and Amber texted throughout the nights to stay on top of Sage’s situation. During this phase, to keep fear from overwhelming him, Tony reports that he had to stay “curious”. Instead of passively allowing his scared thoughts to run rampant, he and Amber would actively, 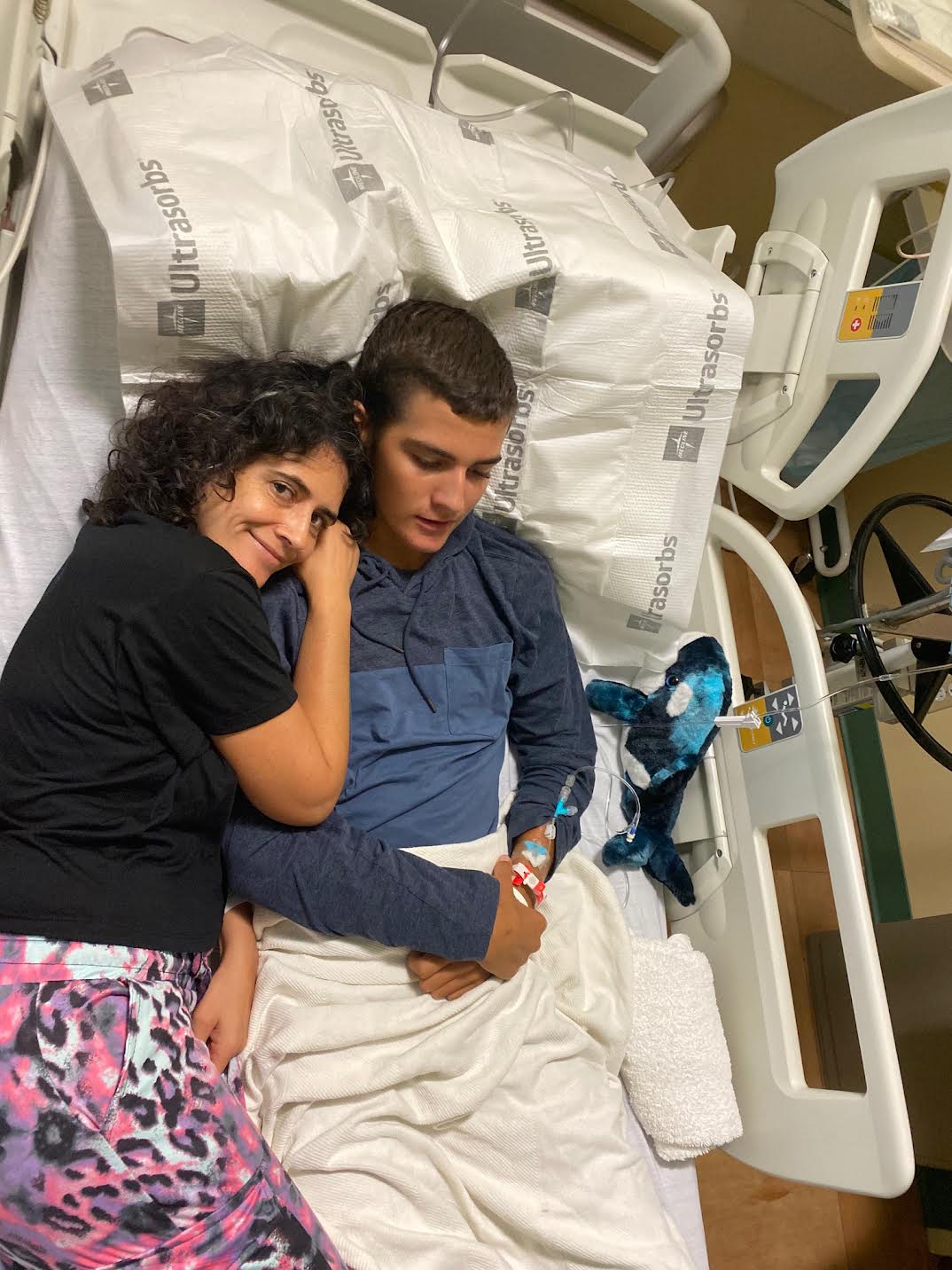 respectfully question the doctors on the symptoms, the possible causes, and all their potential treatments for Sage’s condition. Using his mind in this way kept Tony present.

Amber’s two requests from the hospital were for an artist’s drawing pad and a yoga mat. As a painter, she relied on her art and her writing to journal her mental and emotional way through the experience, keeping her body fresh with yoga. She tracked all her emotions – such as guilt at having taken 2 minutes to get off her zoom call with several hundred clients, to respond to Sage back home when he first started feeling body shakes coming on. She allowed herself to really FEEL those emotions, and then let them go.

During all that time, Tony and Amber endured the agony of NOT KNOWING what was wrong with their boy. With an excellent team of doctors, from an infectious disease specialist, a neurosurgeon, an eye specialist, to ear-nose and throat doctors, no one could definitively diagnose him. These parents stayed in the unknowing without spinning out. Throughout their ordeal, while talking with me, they were each able to ask me about my life and what was going on with me, and truly listen, there in the moment, then move back to attending Sage. Admirable presence. 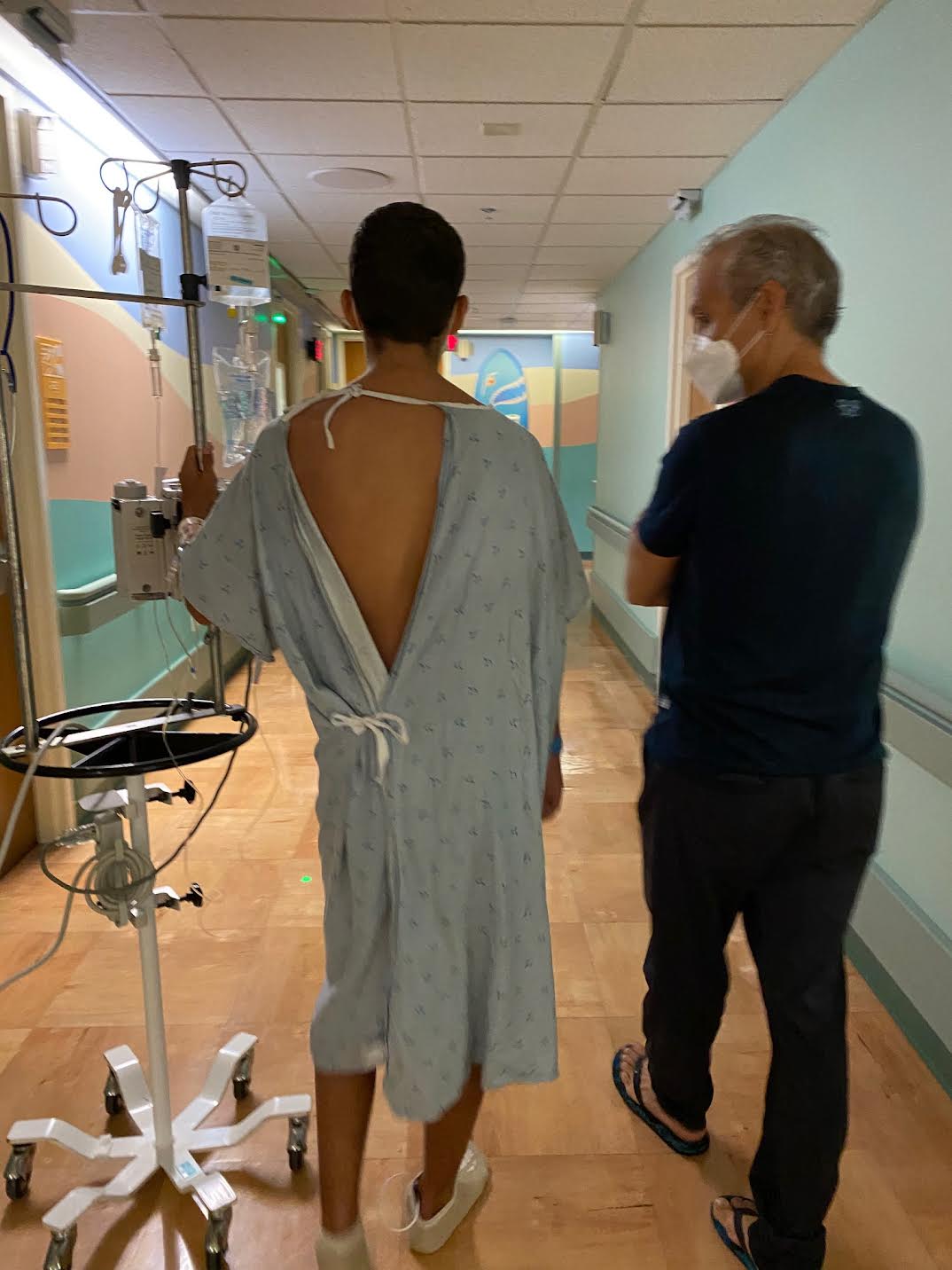 as to call upon their support network. Amber and Tony never allowed themselves to get into a situation of feeling all alone. They remembered what they teach: that we are all part of an interconnected fabric of family, friends and others who want to help. They put out the word that they needed everyone’s prayers, blessings, and meditations to get through this nightmare. The response was immediate and overwhelming. Hundreds of emails, texts, cards, and flowers flooded in, with meals sent to the hospital, neighbors watching the dog and house, and grandparents caring for their younger son. They knew they were not alone!

After a week, the doctors felt it safe to move Sage out of ICU and into a regular hospital room, even though they still did not know exactly what they were treating. Amber relinquished her place at Sage’s bedside to get a couple nights of real sleep at our house, then flew home to their son Bodhi. Tony now moved into the hospital as Sage’s full-time advocate and gatekeeper.

For any of us who have spent time in a hospital, which is supposed to be a place of rest for recuperation, we know that it’s really not that quiet or peaceful a place. Tony stayed present by taking it on as his duty to teach ninja techniques to every individual who entered Sage’s room, teaching them to assess the situation (like, is the kid sleeping while I’m shoving the door open, calling out “Dinner”?), then adjust their volume accordingly, and communicate appropriately. At one point he had to give a politely intense lecture to a group of 5 doctors who unceremoniously barged into the room, talking loudly and mostly about Sage as if he couldn’t hear or understand them.

From his years of training in the Mankind Project, Tony stayed in the moment by self-monitoring while he was protecting and advocating for Sage. We’ve all met obnoxious, overprotective parents. That wasn’t Tony. He kept his intensity blunted instead of blaring, 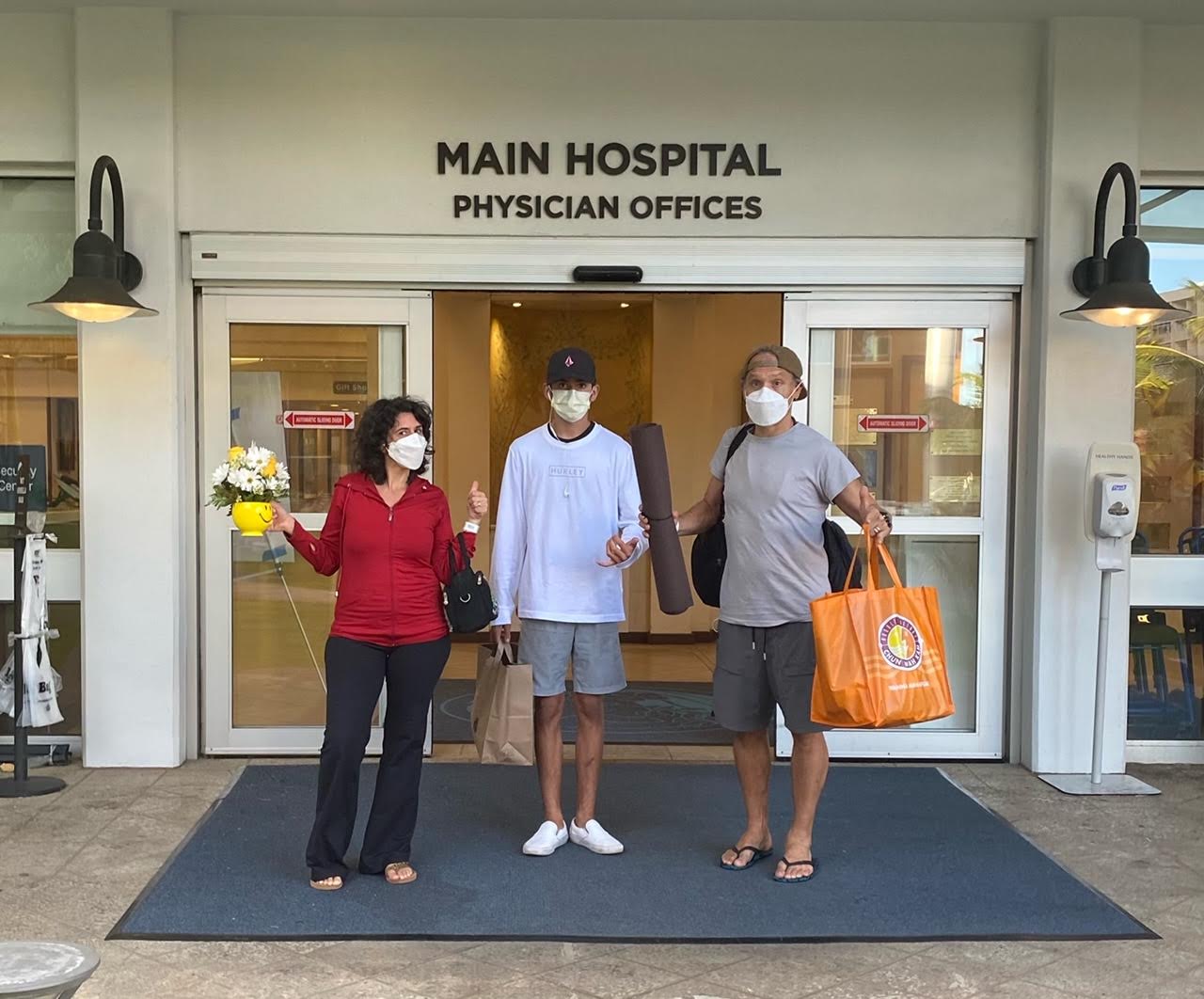 showing his gratitude for all the excellent care they were receiving – mixed in with a few encounters with staff who just didn’t get it. In a steady, self-restrained way, Tony just made sure Sage got the care he needed.

I’m happy to tell you that two weeks after Sage was admitted to Kapiolani, the doctors released him with a diagnosis of meningitis, from which he was well on his way to recovery. His eardrum had burst, on both the outside and the inside to the brain. Can you imagine?

Tony, Amber, and Bodhi were all at the hospital to fly home with him.

And that’s how SOME people – some very mature people who have trained themselves to truly stay present in the moment – handled their kid almost dying. Amazing, yeah?

May we continue to open our hearts and minds,

in order to work ceaselessly for the benefit of all beings.

May we go to the places that scare us.

May we lead the life of a warrior.