The belly laugh that comes from the Dalia Lama compares with no other I’ve ever heard. It wells up from his deep, earthy understanding of humanity’s plight, pitched between our most outrageous monstrosities towards one another and our most 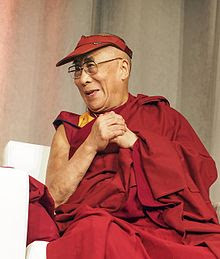 sublime love and longing for a better tomorrow. Rumbling up from that depth, this laugh eventually breaks free into the open air like a thousand chuckling butterflies, lightly soaring out in every direction, tickling each heart they touch. As his laugh ripples towards us, veils of worry, distress, and anxiety drop away from everyone in his presence. We all join in for a good laugh with him, and acknowledge at a soul level that all is well in the great universe. His laugh, like a huge, enveloping bubble of compassion, carries us up to a more rarefied, sparkling state of being. We are more truly ourselves.

Who is this man who can emit such a laugh?

Tenzin Gyatso, the 14th Dalai Lama, calls himself nothing but “a simple monk”. And yet this man has through his own efforts released into the outside world some of the most illuminating teachings from the Tibetan Buddhist tradition, teachings that monks and nuns had carefully tended for a couple thousand years in 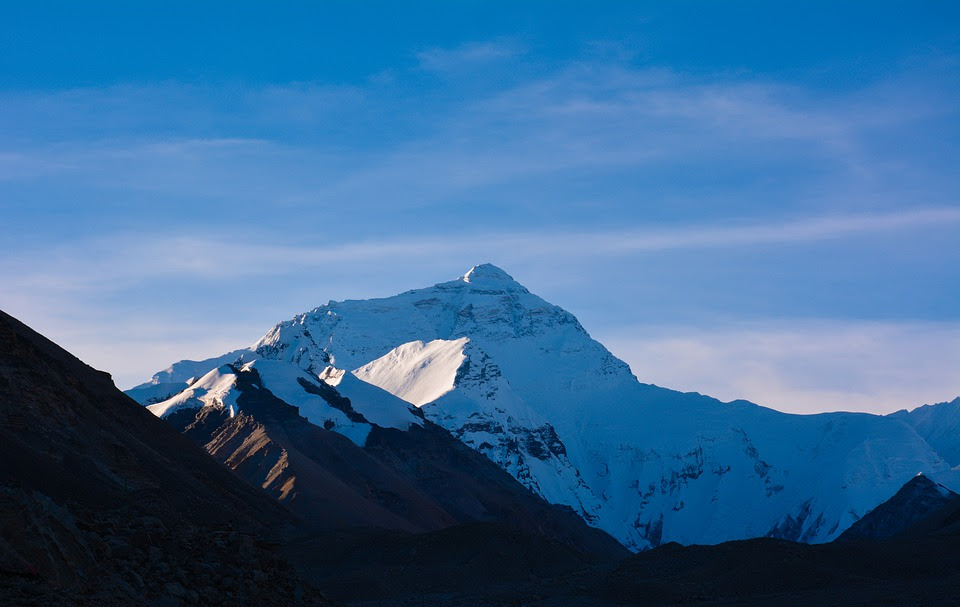 the inner sanctuaries of Tibetan monasteries, high in the  Himalayas, one of the most remote places on Earth at the time of his birth on July 6th, 1935.

As we celebrate his 85th birth week, I take time to reflect on all the beneficent impacts the Dalai Lama has made on my life and the world from the occasions on which I have met him, heard him speak, or read his works.

For hundreds of years, the spiritual leader of Tibet has borne the title “His Holiness, the Dalai Lama”, which his people bestow upon the being whom they consider to now be the 14th incarnation in Tibet of the same great teacher. As has happened time and again, the former, 13th Dalai Lama gave hints 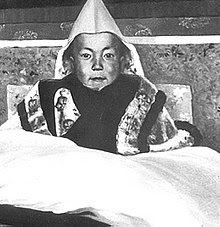 before his passing of where in Tibet he would be reborn. After his death, his closest advisers took favorite cherished objects of the 13thDalai Lama with them on their search for a baby who would show signs of the Wisdom and Compassion that resides within the essence of each incarnation of the Dalai Lama. Eventually, they came upon a toddler who had been born not long after the death of the 13th Dalai Lama, a little boy who immediately recognized and picked up his own toys and religious objects when presented with an array of similar-looking items. Thus was the 14th Dalai Lama found and brought to the grand Potala monastery in Lhasa, Tibet with his family to reacquaint himself and train in the ancient Buddhist tradition with hundreds of other monks of every age.

The Dalai Lama describes his youth with good humor as a life of rigor and love. The elder monks took tender care of little Tenzin with gentle discipline. They indulged his inquisitive mind, which adored science and technology. He spent his days in long hours of meditation, study and memorization of ancient texts printed by hand on parchment, as well as spirited, good-natured debate with his fellow young monks, occasionally interspersed with an opportunity to take apart a watch to understand how it works, or even to figure out how to play an early black and white movie. His early fascination with science plays out to this day when he invites Buddhist metaphysicists to dialogue with Western quantum physicists!

By the time Tezin reached the age of 15, the Chinese Communist Party (CCP) had their eye on Tibet, partly for its natural resources and militarily strategic position, partly because it represented a thriving 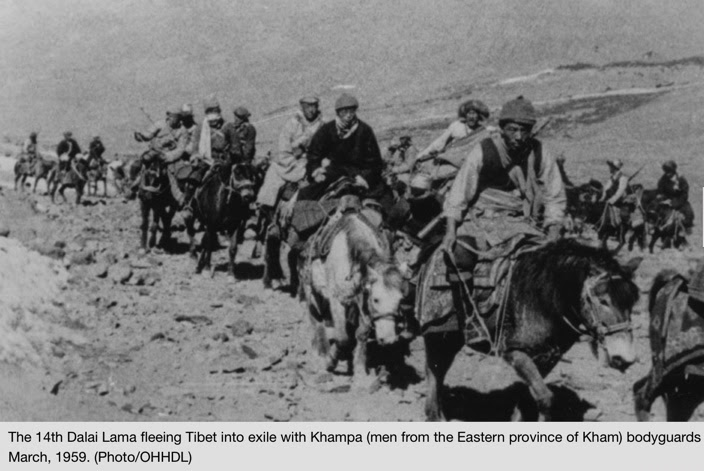 religious heritage in the face of the Communist conviction that “religion is the opiate of the people.”  A peace-loving people, the Tibetans didn’t even have a standing army. By the time word reached the Dalai Lama’s advisors, Communist forces were invading Lhasa, and his protectors barely had time to spirit away the young leader, accompanied by a small band of brave companions, making a potentially treacherous crossing of the Himalayas to reach the Indian border. They tell of being miraculously concealed by a small cloud that came down to enshroud them when they otherwise have been exposed and potentially captured.

Arriving not long after Mahatma (Great Soul) Gandhi and his Indian followers had thrown off the yoke of British imperialism in 1947, the young Tenzin Gyatso found a safe harbor in India when the Chinese stormed his homeland. India welcomed the young Dalai Lama as a 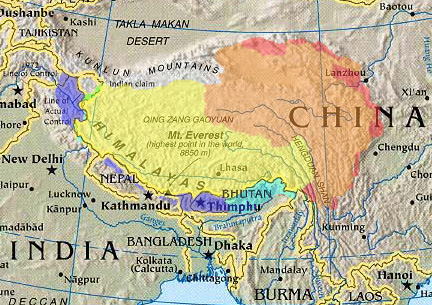 political leader seeking asylum and has maintained their welcome ever since he arrived in Dharamsala, India in 1951.

Despite unremitting atrocities against his people by the CCP – details of which I will not burden you with, asking instead that you research them if you can bear painful truths – the Dalai Lama has extended an open heart of compassion.

In a 1981 letter to Deng Xiaoping, leader of the CCP, the Dalai Lama wrote:

With truth and equality as our foundation, we must try to develop friendship between Tibetans and Chinese through better understanding in the future. The time has come to apply our common wisdom in a spirit of tolerance and broadmindedness to achieve genuine happiness for the Tibetan people with a sense of urgency.

On my part, I remain committed to contribute my efforts for the welfare of all human beings, and in particular the poor and the weak to the best of my ability without any distinction based on national boundaries.

Seeing Tenzin Gyatzo and his Tibetans as anything but their “equals”, the CCP regime has consistently met the Tibetan leader’s efforts at diplomacy with the aggressive Chinese expansion of control over Tibet, governmentally and economically, destroying Tibetan temples and communities, paving superhighways into this once remote region, and claiming that they are “liberating” an ignorant, backward population. They have actively and violently repressed the Tibetan people, their language, religion, education, and cultural practices. The Dalai Lama’s tolerance and active love for his people’s oppressors, though not for their oppression, staggers my imagination.

Meanwhile, the universe seems to assure that no ill deed is wasted. In exile from his homeland, the Dalai Lama has brought with him Tibet’s vast, compassionate system of wisdom teachings, which he has devoted his life to sharing with the outside world. Establishing a center of learning in Dharamsala, the Dalai Lama has made it a point to travel the world extensively, carrying the message of compassion for everyone and tolerance for all faiths, as well as the Tibetan Buddhist teachings of wisdom and the path to Enlightenment for all beings. 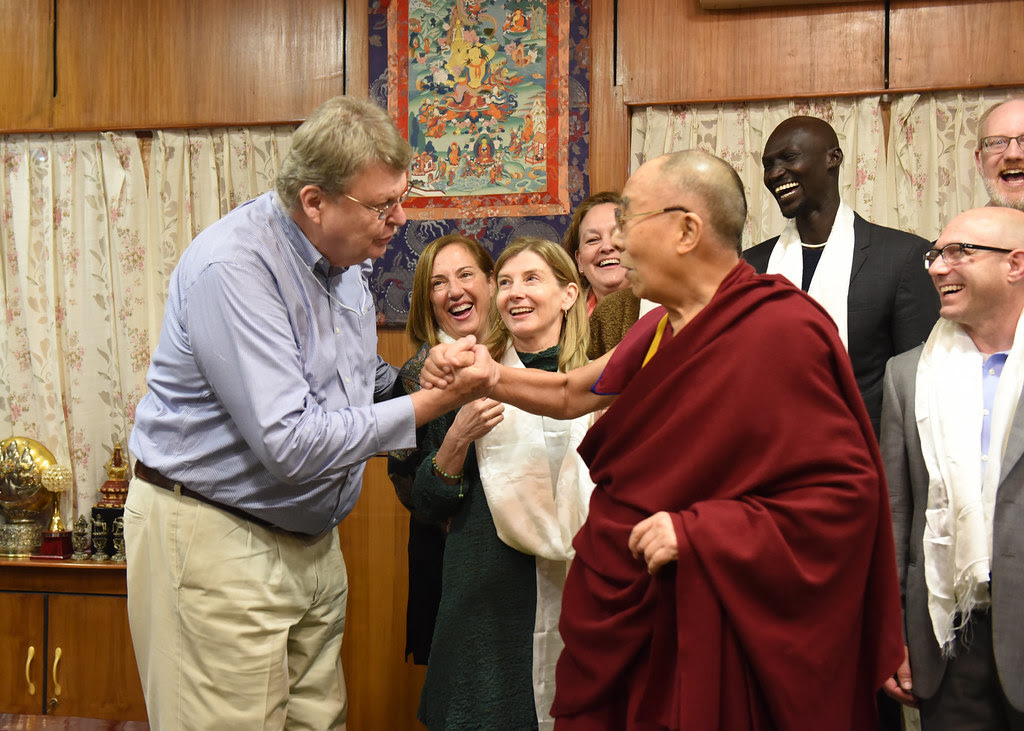 I hear echoes of Gandhi’s words and examples whenever I’m in the presence of His Holiness, the Dalai Lama. Both have committed themselves to a life of non-violence in the face of tremendous oppression by invading forces. Both embrace all religionists and non-religionists. Both encourage their admirers to maintain their original faith rather than converting to a different faith.

Although the Dalai Lama would love to be a vegetarian like Gandhi was, his body type simply has not allowed him to do so, coming from a snowy land with very little plant food. A vegetarian friend of mine in Santa Barbara who once volunteered her kitchen to his followers who prepared his meals got the surprise of her life when 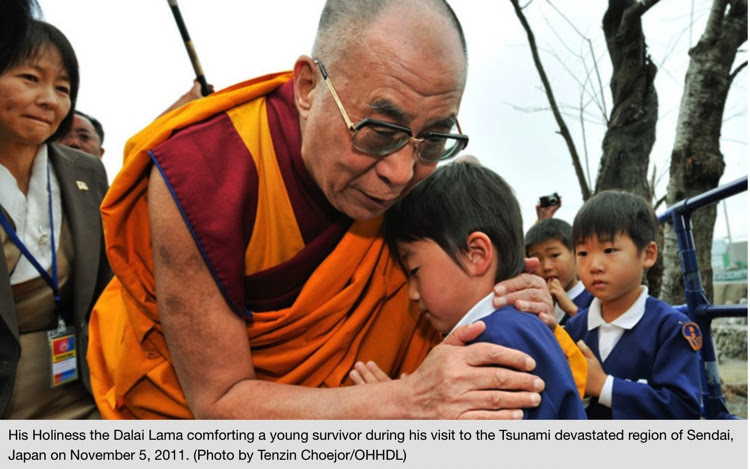 they used her pots (which had never touched meat) to prepare a lamb stew for him! From the Dalai Lama’s perspective, all of life is gradually moving – during lifetime after lifetime – towards Enlightenment, so we’re taking lives even when we harvest vegetables. Another friend of mine insists that he heard the Dalai Lama say in Dharamsala that the life of a single cow could feed a whole village, whereas it might take dozens or hundreds of fish lives to accomplish that feat! The Dalai Lama is enough of a joker that I think he might have been gently teasing his pious Hindu friends, who consider the cow to be holy. I take it as a teaching to have gratitude for EVERYTHING we eat, since each seed or cabbage, fish or sheep is giving up its life for us in its ongoing journey to Enlightenment. No thing or being has the exclusive claim to holiness.

On every occasion when I have heard him speak, the Dalai Lama has maintained a relaxed yet energized demeanor, sometimes 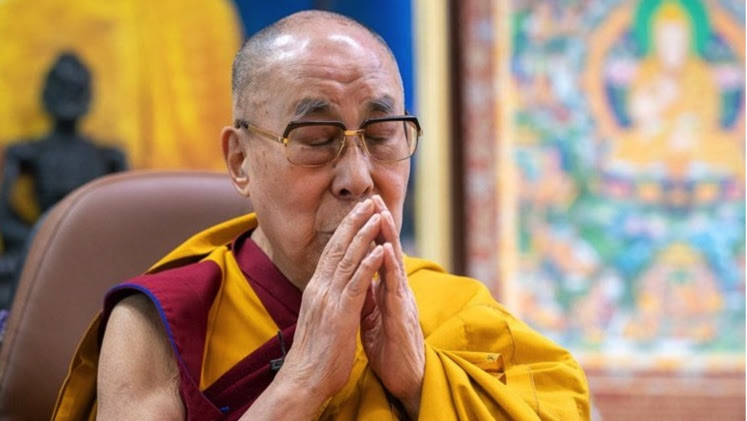 swaying as he sits in meditation. If the subject matter is serious, he delivers it with due gravity, yet a bright twinkle usually hovers near his merry eyes. When I hear the earth-deep intonation of Tibetan texts and mantras, during which each of the chanting monks is incredibly able to produce two vocal tones at the same time, I’m carried back to ancient ages beyond the scope of my memory. When the Dalai Lama lectures or answers questions, he frequently uses a quaint English with an irresistible lilt and cadence. He sometimes allows a translator to pitch in, especially for highly technical 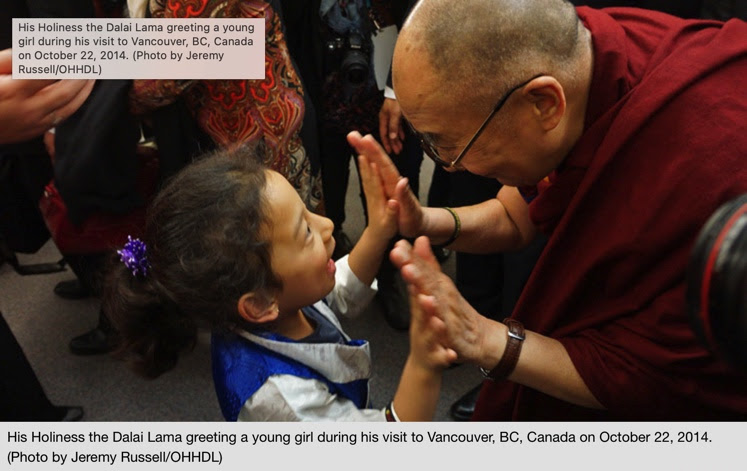 points about Buddhist teachings. For application of the teachings, he’ll deliver that in English, gesturing as much with his eyebrows as with his hands, which often tuck in the edge of his wrapped robe. Even in temperatures that are chilly for me, he’ll usually have one bare arm – reminding me of his birth high on the Himalayan “rooftop of the world”.

Cliff and I attended several huge gatherings in California and Hawaii where the Dalai Lama spoke. On the one occasion when I personally met the Dalai Lama, the founding president of the Institute of World Culture, Raghavan Iyer, had arranged for him to come to Santa Barbara, California for his first ever visit. As the Dalai Lama came down the aisle 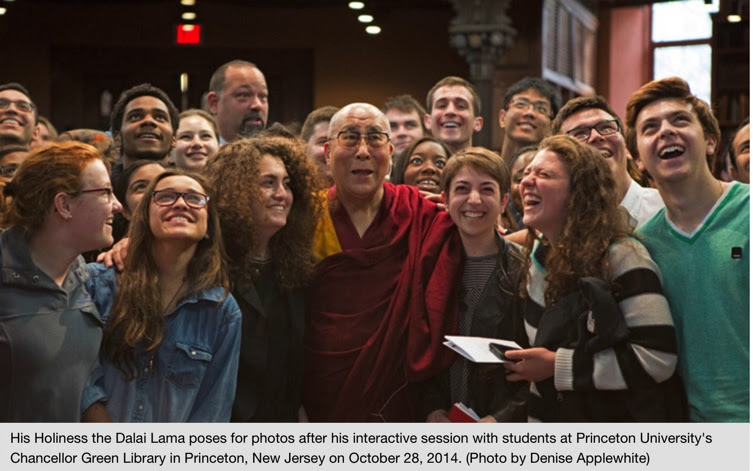 at the end of the session in a small meeting hall, warmly greeting, chuckling, and shaking hands with people in the audience on his way out the door, I got a bear hug! Sweet! Looking backwards, I think of all the hundreds of thousands, millions of people he’s touched with his life force and laughter, and I feel as if the whole world is blessed by his presence here on Earth.

Happy Birthday week, your Holiness! I’m so glad you were born! And if, as you predict, your next incarnation will be as a little girl outside of Tibet, I trust that she will be recognized and live a different yet equally beneficent life with us.