Life at the Center, by Renée Tillotson

All the joy the world contains has come through wishing happiness for others. 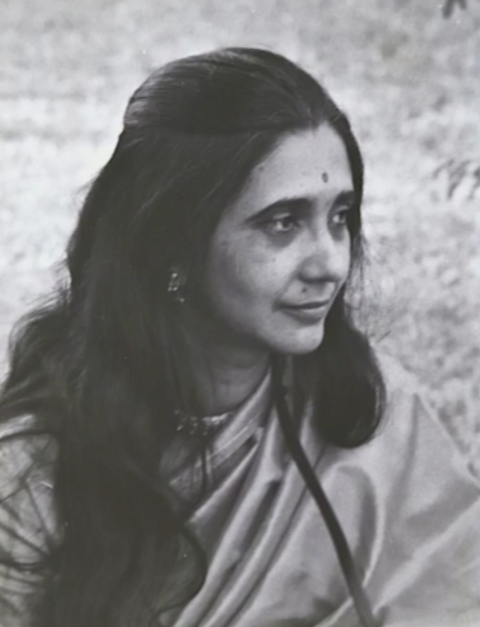 for nearly half a century: Professor Nandini Iyer. As Cliff mentioned after her passing, we cannot quite picture how differently we might be conducting our lives without Nandini Iyer’s beneficent influence.

Raised in Gujarat, India to a family who worked for Gandhi’s vision of Indian Independence, Nandini went on to attend some of the finest colleges in India and England, and eventually became a professor herself, whom Cliff and I studied under. Her memorial service – an elegantly conducted, live-streamed event by her son Pico Iyer – brought me insights into the beautiful life of a very private person, even though she had spent so much of her time in service to the public. 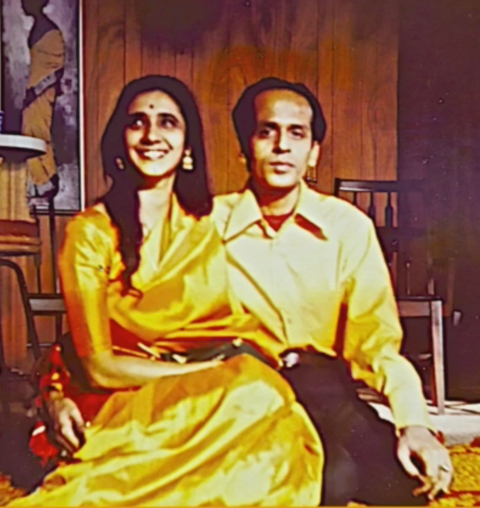 The Institute of World Culture in Santa Barbara, which Nandini co-founded with her husband, Raghavan Iyer (http://www.worldculture.org/pages/2_founders.html), largely inspired me to found Still & Moving Center. Their vision and examples of lifelong learning have always guided my view of what is possible as we progress on our life journeys right up to our last breath. On a humorous note, Nandini was still competing – successfully! – with her son Pico in the TV game of Jeopardy on the day of her passing, still gathering, storing, and recalling facts about the globe’s events and people.

On a more sincere note, Nandini and her husband Raghavan shared more insight 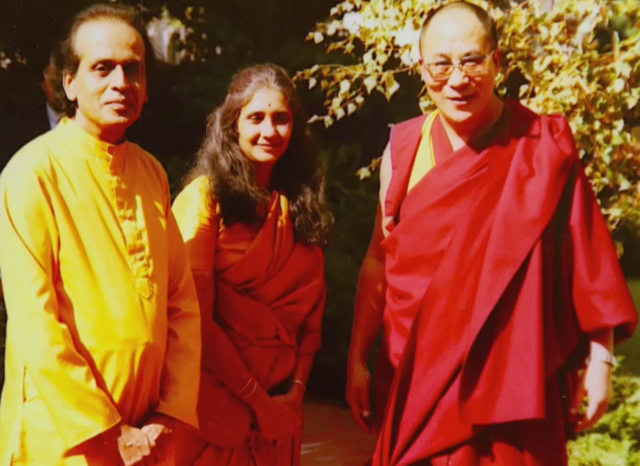 into the world’s religions, cultures and philosophies – basically, more life wisdom – than anyone Cliff and I have ever known. They came together from India to England to become Oxford dons (professors) at very young ages. Given the high esteem in which they were regarded in their academic fields, they could have gone from Oxford to any university on earth of their choosing, yet they decided to go teach at the relatively humble University of California at Santa Barbara. Cliff and I benefited enormously from their decision, since we had each chosen to attend UCSB without knowing what exceptional teachers we would be meeting there.

I can’t recall the exact event at which I first saw and heard Nandini speak. What I do remember is how she struck me as very beautiful, wrapped in one of her 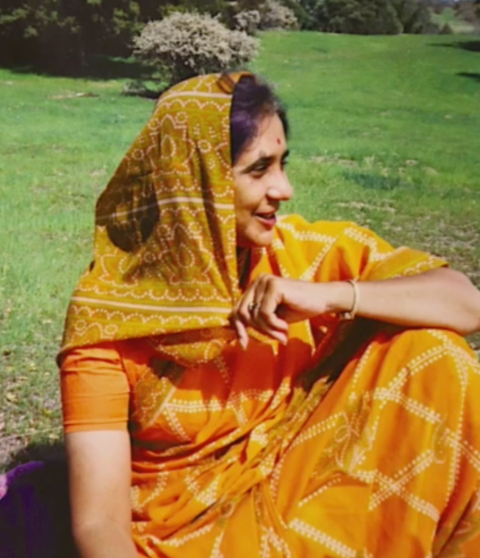 gorgeous silk saris, which she always managed to keep perfectly draped and tucked – quite a feat, if you’ve ever tried wearing one! She carried herself with a calm confidence… almost stately, if you remove pretence and snobbery from that term. When she spoke, she always presented her thoughts in an elegantly organized, clear, incisive manner that made it relatively easy for me to take notes on what she said – even if many of the concepts were over my head. What inspiring notes they were!

By enrolling in both her Sanskrit language class and in her religious studies classes, Cliff actually received a lot more of her university teaching than I did. She did not seem to slacken the standards that she had maintained at Oxford when she came to UC Santa Barbara! Cliff says her Sanskrit classes were the most intellectually rigorous courses of his college career!

As a member of the Institute of World Culture, I got to learn from Nandini at her 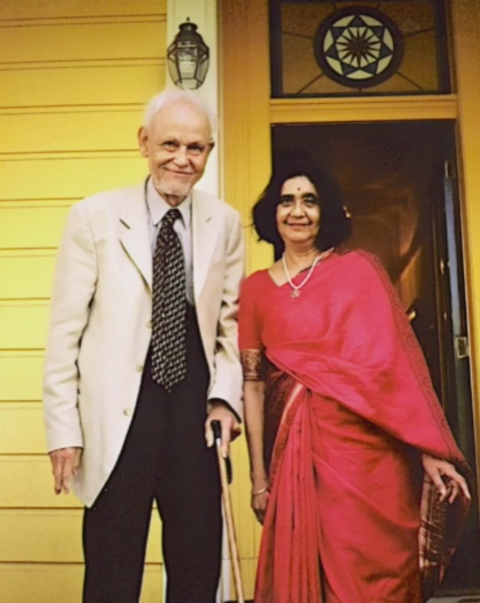 Saturday seminars, as well as at lectures she gave at the United Lodge of Theosophists. I particularly remember her explaining mysticism from the world’s different spiritual traditions. She suggested that a mystic vision is a direct insight into reality, a profound observation that is so personal to the observer that it cannot be fully shared; nor can it be proven or disproven. The inscrutable nature of the mystic’s experience is at the heart of what we mean by the word “mystic” – inescapably enshrouded by mystery. She nevertheless conveyed what she could of mystics like Teresa of Avila (Catholic nun), Mira (Hindu poetess), George William Russell (Irish Theosophist), Rumi (Sufi poet), and many others. She spoke of their mystic experiences as being absolutely transformative to their lives, giving them a glow, an efflorescence that can illumine the paths of other seekers. I marveled that such beings as she described could actually exist. 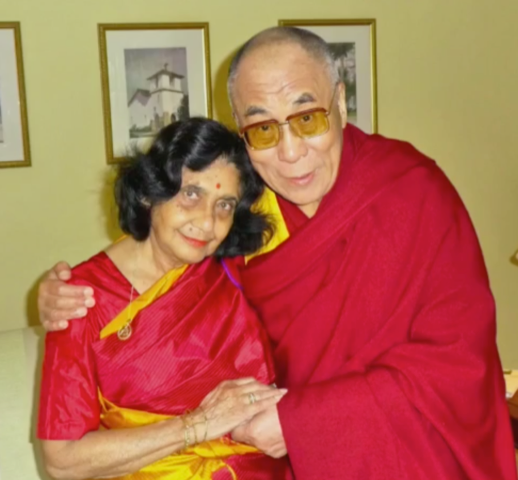 She and Raghavan hosted the Dalai Lama at the Institute of World Culture in 1984 on his first-ever visit to Santa Barbara. He is also a remarkable human being living on this planet, I must say!

On our mundane level, Nandini would attend birthdays, weddings, and bridal showers of various members of the Institute of World Culture. She was always the life of the party with jokes, recipes and hilarious stories of her travels and family doings. At my bridal shower, she told us about being pregnant with their son Pico (now a full-time writer, publishing 15 books, translated into 23 languages, with 4 TED talks to his name). Some of her female friends in Oxford shocked her by saying they were going to give her a “shower” before the baby was born. Give her a shower?!? Newly arrived from India, Nandini could not imagine what sort of strange bathing ritual they might have in mind for her… never having heard of a ‘baby shower’!

I recall Nandini telling a story of leaving her husband in charge of their baby for an hour when Pico was only a couple weeks old, and her horror upon returning home to find her husband spooning chocolate ice cream into tiny Pico’s mouth. Fathers in the ‘50’s! What are you going to do with them?!? Another baby story she delighted us with involved Pico’s ability to speak and comprehend far outpacing his interest in learning to walk or climb. She told us of hauling not-so-little Pico out of his crib, and his commenting, “Poor mum. I’m such a heavy donkey!”

At such parties, Nandini regaled us with stories of her battles with rattlesnakes 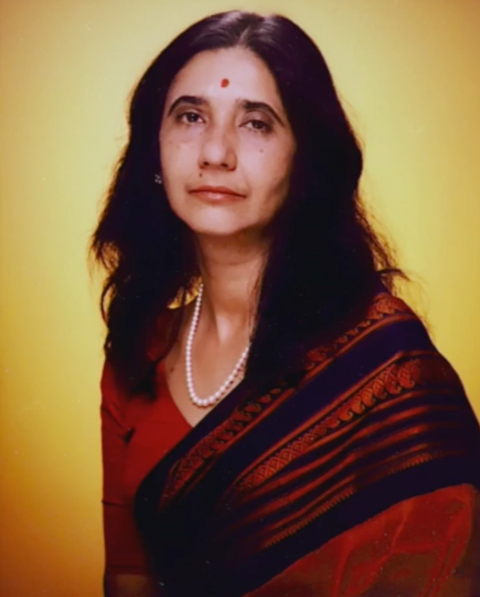 that appeared in their mountain home, high in the chaparral-covered hills above Santa Barbara. She was always victorious, sometimes armed with nothing but her husband’s shoe! Another set of battles happened on her crusade to educate ignorant Westerners of the need to provide vegetarian options on their menus. I so clearly pictured her in my mind’s eye as she described receiving a plate of beef or chicken on a long commercial airline flight, at which point she indignantly stood up in the aisle, demanding a vegetarian meal loudly enough for everyone on the plane to hear her. Nandini was definitely a force to be reckoned with.

For all of her verve and even ferocity, she had the compassionate heart of a bodhisattva. Pico said at her memorial that she donated generously to countless charities, comforted and counseled everyone around her in their times of need, and held an especially tender place in her heart for animals and children. Once while I was pregnant, I asked her whether I should instruct my doctor not to give me a blood transfusion if I had complications during childbirth, given my concern about receiving physically/morally/spiritually contaminated, “unclean” blood. She looked into my eyes and asked, “And what would happen to your baby if you needed that transfusion to survive? Who would take care of your baby?” Her response humbled me. What was I doing considering my “purity” at the possible expense of my unborn child? Of course a mother puts her child’s wellbeing first. Nandini always did, as Pico attests to.

I believe that living in this world is always a sacrifice for boddhisatvic human beings. The rest of us have such crude sensibilities. Growing up in a sophisticated Indian Brahmin family, traveling widely, and teaching at the most venerable 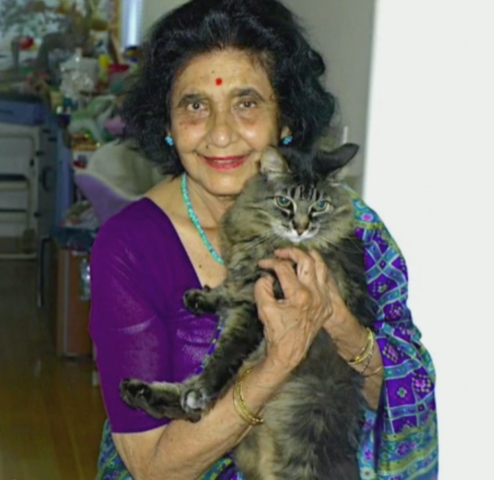 university in the world while at Oxford, Nandini must have found Southern California to be something of a cultural backwater. She reminds me of a noble Shakespearian character surrounded by local yokels! Pico holds a brighter interpretation of his parents’ move to California. He notes: “I notice that many in Santa Barbara assume my parents gave up Oxford for UCSB, when in truth they upgraded from Oxford to the wonderful and exhilarating Center for the Study of Democratic Institutions [at UCSB] in the ‘Athens of America’…. They found the students in Santa Barbara so wide-open, so eager to learn, so humble and attentive and engaged, especially compared with the rather insouciant and cynical kids in England.” So there must have been a receptivity in Santa Barbara that called them there.

In any case, Nandini made the most of the situation, caring about and raising up all of us around her, introducing us to some of humanity’s most sublime religious thought, exquisite poetry, and uplifting philosophical inquiry. Outside of her University position, she never received a penny for the countless hours… years… decades of service she gave teaching and illuminating the rest of us, wishing and working for others’ happiness.

A video of her Memorial, conducted by son Pico Iyer, is available to you here, when you click “Nandini Iyer Celebration” to the right in the ‘Related Videos’ section click. https://unitysb.org/livestream